Montrose recently endured a 2 leg pyramid playoff against Highland League champions Brora Rangers after finishing the season bottom of the table.
But despite their bottom of the table finish,  they won two and drew one of their four matches during April under Hegarty, who took charge in February with the side already sitting bottom.
Montrose appointed Hegarty, the 60-year-old who previously managed Forfar Athletic, Aberdeen, Dundee United and Livingston, after sacking George Shields. 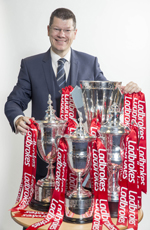