Looking to out the disappointment of the previous week’s Scottish Cup exit behind them, the Gable Endies took the fight to the Kirkcaldy side from the start, dominating possession and keeping their opponents pinned down in their own half for long spells.

Graham Webster was the first to try his luck, but could only send his free kick into the defensive wall.

Craig Johnston should have done better in the 29th minute when the ball fell to him while he was unmarked in the Raith box, but his shot rolled across the face of goal and out of play.

Montrose had a goal disallowed a minute later. Blair Lyons bundled the ball into Ross Munro’s net at the second attempt, but was adjudged to have handled the ball in the buil-up.

The home side continued to rain shots down on the Fife side, Johnston and Lyons both having shots blocked in a frenzied 30-second period, but the Raith players managed to scramble the ball to safety.

The first half ended with Cammy Ballantyne blasting wide from 25 yards out after a surging run forwards.

Montrose struggled to maintain their first half momentum after the break, and Raith, who used all three of their substitutions in the opening 25 minutes of the second half, managed to capitalise in the 69th minute. BRAD SPENCER controlled the ball outside the Montrose box and fired a low shot into the corner of Aaron Lennox’s goal.

Clear-cut chances were few and far between in the second half. Matty Allan, who had an impressive game at the heart of the defence, came close with a header from a corner in the 75th minute.

As the match drew to a close, Raith’s Dan Armstrong had a chance to double their lead, but shot straight at Lennox. 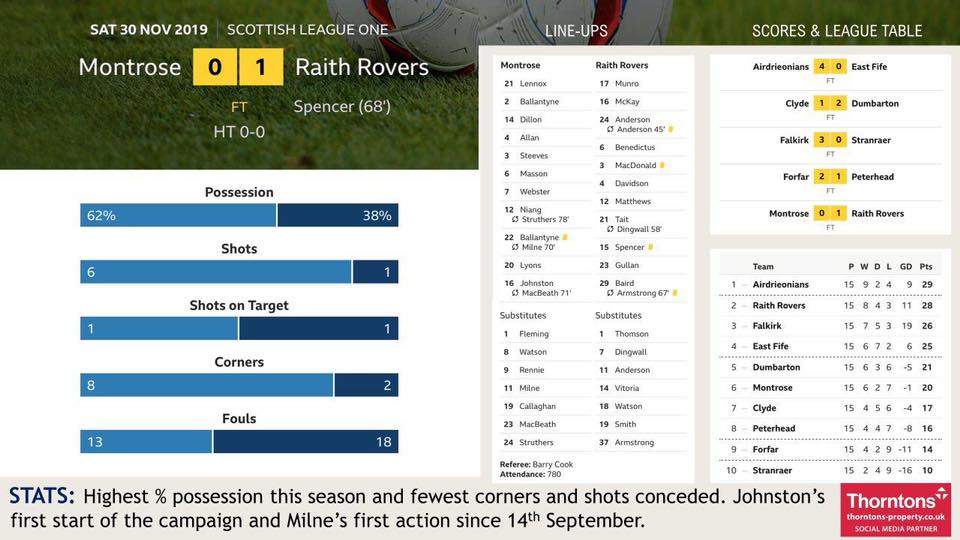