A hard fought win by the home side to kick off the decade and move them above East Fife into a play-off spot for the first time this season.

Referee Chris Graham started the game in front of a decent crowd of 833 and it was Montrose who attacked first with Webster scampering down the right but his low cross was intercepted and from the resultant corner Watson’s header was collected under the bar by keeper Brett Long. His long clearance resulted in a corner at the other end for East Fife but keeper Aaron Lennox collected easily. His long clearance was booted right back by the Fifers and down the right they beat the Montrose offside trap but the cross was poor and the danger was over.

Back to the other end it quickly went as Milne broke clear but his shot was smothered by Long. End to end stuff and only 10 minutes gone.

This 50/50 stuff continued and Lennox had to change direction swiftly to avoid a wicked deflection ending up in the wrong place for Montrose. Next up was another chance for Montrose as a Lyons run brought a corner and as the late arriving Dillon hit a rising shot the effort was again collected by Long.

East Fife again beat the offside trap as Dowds went clear but his good cross was scooped over the bar at close range – a let off for Montrose and another let off quickly followed as Dillon was beaten for speed down the middle but Davidson’s shot went over the top when the goalmouth was at his mercy. These were warnings for Montrose however and warnings which were heeded as things tightened up after that.

Still only 30 minutes played but a period of stalemate came next as the Fifers ran out of steam and Montrose re-grouped after a hectic start. Still level it appeared the first goal of the game would be very significant. Lyons again tried his luck but as he shaped up the keeper came out and smothered it then a Webster cross was inches in front of Masson who just failed to prod it home.

Watson blasted one over the bar from 30 yards then came the goal which was going to settle the game. In the 35th minute Rennie collected the ball just outside the box, turned and dinked it through a gap to the onrushing Lewis Milne who made no mistake as he hammered it past Long to make it 1-0 to the Mo.

Leading up to half-time Watson had another shot from 18 yards and really should have scored if on target but it flew over the bar. The last piece of first half action saw Davidson yellow carded for an altercation with Masson off the ball. 1-0 to the Mo at half-time.

For the second half it was important for Montrose to come out on the front foot as East Fife clearly had a goal in them. It was Montrose who first came closest as Rennie hit one just the wrong side of the post as the ball came at him quickly. Milne was put through again this time by Masson but the good chance was diverted for a corner which was hit long.

Then East Fife had a spell on top and only an offside flag stopped them as it looked dangerous. Rennie reminded referee Graham where his yellow card was for a foot up too high. Matty Allan broke up the danger and sent Cammy B off down the right but he was brought down on the edge of the 18-yard box only to see Rennie’s free kick blocked by the defensive wall.

Milne took the next free kick 20 yards out but again it was high and wide.

A second Montrose goal looked likely when Webster broke clear but as a goal beckoned he was caught and the chance went begging. Johnston had the next chance as he burst into the area but keeper Long anticipated correctly and blocked the shot.

The game entered the closing stages and apart from a scramble right at the end Montrose survived and secured a 1-0 win.

A long trek next week and despite Stranraer’s lowly position Montrose will need to be at their best as the two previous meetings this season were both close and keenly contested. 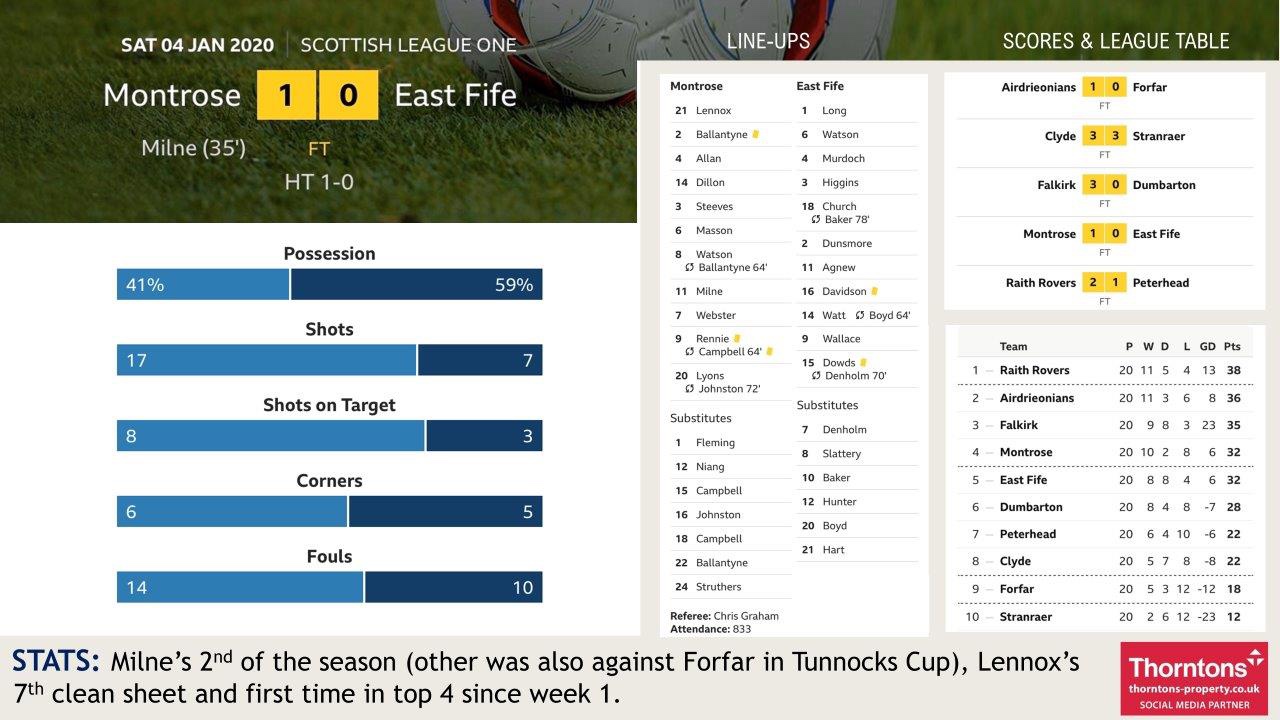