Montrose Fight Back To Earn Point 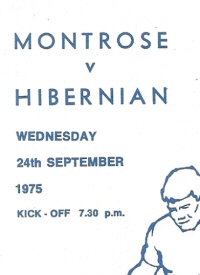 It’s been a long time since we played Hibs in that memorable match in  1975, in fact 45 years have passed and I feel I have to put the record straight. I had a chat with my long-time friend Steve Doyle (Sassmo) and we decided to clear up all the gossip and exaggeration etc.

I was 22 years old and had not been in the full back position very long (ed: some say he never was in that position very long even during a game!). I was put in the right back position when Peter Urquart broke his leg in a game against Clyde at Shawfield when I think the final score was 1-1. It was a cup game in Feb 1973 and the great Brian Third scored a screecher of a goal to equalise in the dying seconds. I was on the substitutes bench that day and Alec Stuart (another Mo ‘great’) put me on in the right full back role and moved Bruce Martin over to left back. It felt good right away as I was facing the opposition with more room and more time (than playing a forward role) on the ball.

The game against Hibs at Easter Road in the first leg was a real test for Montrose. Hibs had 5 or 6 international players in their side, Stanton, Brownlie etc. so it was a big ask for a part time club like Montrose to compete against a full-time club both physically and mentally. But, Alec Stuart had installed a belief in this Montrose squad of players which he had built for several years – we lost 1-0 to a goal by Joe Harper but over the 90 minutes we matched Hibs in every department other than scoring a goal.

I remember shaking Arthur Duncan’s hand at the end of the game and him saying ‘you’re still in with a shout,’ The second leg at Links Park had the town of Montrose buzzing. It was a Wednesday night and the wind was really strong. I might be wrong but the game was meant to be covered by TV but due to the weather conditions they pulled out and they covered a Rangers game instead. On the day I was working with my brothers on removals and we had to shift 27 pianos in St. Andrews for a school of music. They wanted the pianos moved downstairs! I said to my brothers ‘I’ve got a big match on tonight against Hibs but my brother Robert said ‘your job comes first’ so we duly arrived to do the piano job. When we got there the janitor said in you come but there had been a change of plan. I though oh-oh, then he said the pianos were going to another room instead of downstairs. I was over the moon – imagine shifting 27 heavy solid pianos down a big flight of stairs then playing a match that night! Anyway, job done, knackered but still in decent shape.

And so to the game. I remember Alec Stuart saying whatever we did we had to keep it tight and not lose an early goal. The longer the game went on the better chance we would have. That was Plan A. Well, we soon moved to Plan B as Hibs scored after 30 seconds! I think it was Arthur Duncan who scored. Anyway, we managed to keep it to a single goal by half time and when we came in Alec Stuart said we’ve given ourselves a mountain to climb but the most important thing was to keep our discipline and not let them run over the top of us. The weather conditions would affect the game in the second half as well and Hibs might feel they had a two goal cushion – which indeed was the case.

We started the second half and found we were getting a lot more of the ball and were creating chances. We needed to score early and big Livvy (Bobby Livingstone) scored with a header 10 minutes into the second half (Ed; I can see it now as I read and write this!). You could see and feel the atmosphere in Links Park rising as those great Mo fans began singing and becoming a lot more vocal, it gave such a boost to the players out on the pitch but we had to concentrate and not fall for the sucker punch. Soon after we were awarded a free kick just outside the box. I took it and managed to score to give us a 2-1 lead on the night – we were back level in the tie. Links Park went wild again. Hibs lad Eric Schaedler shouted to John Brownlie to get forward and get crosses in. They put us under tremendous pressure for about 15 minutes and hit the bar along with a few more chances but we held out the rest of the 90 minutes. 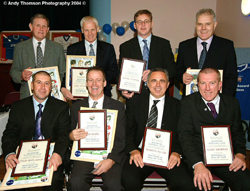 So, on to extra time and it was end to end stuff all on adrenaline no doubt. Desperate stuff at times but still no breakthrough for either side until about 2 minutes from the end. John Brownlie tried to pass the ball from right to left just outside our box and I intercepted it, ran it forward and noticed goalie McArthur off his line - only joking! To be quite honest I just cleared it to get it out of our danger area. It must have been 75 yards but wind assisted the ball kept going and McArthur made a mess of it. Kenny Cameron could have put it in to finish it off but gave me that moment of glory which will stay with me forever. 3-1 to the Mo on aggregate now but there was still 2 minutes or so to play. The referee Mr Hutton gave Hibs a free kick just outside our box. My brother Alec thought it was full time and jumped over the barrier and on to my back. Two police officers grabbed him thinking he was attacking me. I said it’s OK he’s my brother so they put him back behind the barrier. Hibs failed with the free kick, the final whistle blew and the whole of Links Park erupted. There were Mo fans everywhere, I’ve never seen scenes like it in all my time as a player. The crowd that night was about 4,000 but it seemed like 40,000. The match started 4 minutes late to let them all in.

I was lucky to win two First Division medals and play in a League Cup Final against Dundee United, I played in a League Cup semi-final for Montrose at Hampden Park, I got a Scotland ‘B’ International cap twice but nothing compares to that night against Hibs at Links Park in 1975. The Mo fans went absolutely wild and I can still see this elderly guy leaning against the barrier – I went over to him and asked him if he was OK. He said ‘I don’t want to go home, I want to stay and enjoy this moment, he literally had a tear in his eye and got out his handkerchief to dry both eyes. That was the greatest moment in my footballing career to think I and my team mates had done that for him and for all the other Mo fans that night.

In closing Les says ‘ Could I just say the present Montrose team and complete set up at Links Park have been amazing recently. Treasure these achievements and the pride you have brought back to the town of Montrose.’

Les as he is now, second left, front row with other Mo legends rightly and proudly in the ‘Montrose F. C. Family.

Edited by Sassmo, words by the legend himself …… Les Barr