Happy days are here again as Montrose get back to winning ways. It was another dominant display by the Mo who largely dictated play in determined fashion. Even when the home side Dumbarton had better spells of possession Montrose soon got back on top in a game which never looked like producing a lot of goals so it was vital to give no early Christmas presents to the opposition. More of that later.

Manager Stuart Petrie served up the same starting line up as last week but this time with instructions that they had better score this week! With that firmly in mind when referee David Munro started the game Montrose set off on the front foot, which itself was good to see particularly kicking with the wind and rain at their backs in the first half.

The first chance of the game came in the very first minute as Craig Johnston was tripped on the right hand edge of the box but Steeves hit the free kick high and wide. Montrose also won the first corner of the game but it came to nothing as Cammy F’s kick hit the side netting. Dumbarton’s first anything of the game was a yellow card for Tumilty who felled Blair Lyons in full flight. Again the free kick came to nothing.

It was fully 15 minutes before the Sons attacked with any sort of threat but a 25 yard shot was watched past the post by Lennox. There followed a 50/50 spell where both sides cancelled each other out in the driving rain. McCluskey looked lively for Dumbarton and he had their best chance after half an hour but his effort was blocked and hacked away to safety. It was a warning sign for Montrose not to take the foot off the pedal as they came storming back at the other end. Three close range shots were blocked one way or another before Dumbarton conceded another corner and were grateful not to concede worse.

The defining moment came from another Montrose corner in the 35th Minute when ANDREW STEEVES connected firmly to a Graham Webster corner and his header flashed into the net to give the Mo a 1-0 lead.

Vital now for the Mo to keep up the momentum and in the very next minute Cammy F and Blair Lyons combined well at close range but were denied by keeper Brennan who pushed it out for another corner which in turn led to yet another corner which Matty Allan slid just the wrong side of the post. As the half drew to a close Dumbarton won their first corner but with the big defenders up the kick was hit short, cleared and the whistle went for half-time. 1-0 to the Mo and deservedly so.

As so often happens the second half turns out to be different but this time Montrose were again up for it with Lyons using his pace and again drawing a second yellow card for Dumbarton this time as Crossan scythed him down. From the free kick a Montrose header was held on the line by keeper Brennan. Lyons was in his element down the left and a constant threat as Crossan was brought off for Langan as the Sons first change on the hour mark. Layne became the third Dumbarton player to see yellow for what looked like an elbow on Allan but it was Layne who was a threat up front with his height and close control. He won a corner which Montrose scrambled away at the third attempt.

As the game moved into the last 20 minutes Cammy F was replaced by Lewis Milne as a flurry of activity followed. Firstly a second goal for Montrose from out of ‘nowhere.’ It was the Dumbarton big centre back RYAN McGEEVER who suddenly turned and sent a hard hit back pass to his keeper from fully 25 or 30 yards, except his keeper wasn’t expecting it as it flashed past him into the centre of the net. An early Christmas present for Montrose in the 76th minute.

At 2-0 to Montrose Manager Petrie brought on Paul Watson to replace Webster and shore up midfield. Shortly afterwards Johnston was replaced by Joel MacBeath to break thing up a bit more and run down the clock. Two more yellow cards followed with Hutton for the home side and not to be left out Masson for Montrose.

The last few minutes were scrappy, Laing flashed a header wide at one end as Lyons and MacBeath both had chances at the other end. Lennox was determined to keep his clean sheet and just managed somehow to beat out a Laing effort as the big striker was one on one in stoppage time. That was it as referee Munro blew for full time and a welcome 2-0 win for Montrose to send their very wet but happy fans back home with the points.

A great team effort particularly with the back four outstanding. In midfield the Mo have interesting options with Niang providing something ‘different’ yet very effective going forward as his central colleagues do their work effectively as well. Up front still work to do but Lyons is a constant threat and with support from elsewhere throughout the team the goals will come provided Montrose continue to play on the front foot and take the game to the opposition. 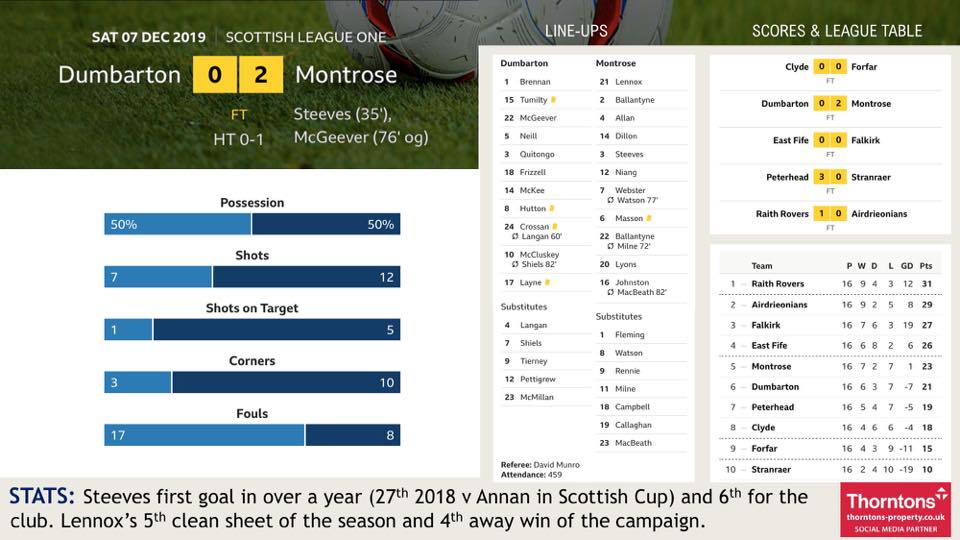