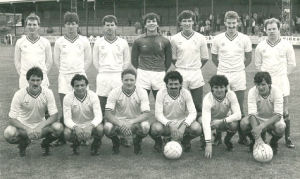 Montrose have only ever won a SFL league title once in their history and that was in the 1984/5 season when Ian Stewart assembled a squad which topped Division Two by three points above Alloa Athletic who finished second. We started with two wins then hit a lean spell and lost the next three games before winning nine of the next ten games and drawing the other – a run which saw us win seven successive league games and shot us up to third place. We hit top spot by mid December and were never out of the top two after that until lifting the title on 11th May 1985 with a 3-1 away win at Raith Rovers who were themselves on a nine game winning run. Indeed if they had beaten us that day they would have beaten their best ever winning sequence and at the same time denied us the title. But they didn’t.

So who were Ian Stewart’s title winning heroes? These are the most regulars in the side that season. Ray Charles was in goal and signed from Banks ‘o Dee in 1980. Less Barr and Chic McLelland were the full backs. Les needs no introduction to us older fans and hails from Dundee where he still lives. Chic was signed from Dundee but also played at top level with Motherwell and Aberdeen. Ronnie Cusiter was our midfield general and a great engine room he was. He came from Junior club Deeside Juveniles but quickly made his mark in Senior soccer and at Montrose in particular. At centre half was John Sheran who was Mr Dependable. John later went on to manage Montrose and can still be seen at Links Park occasionally when his business commitments allow him time away from his Aberdeen base. A very popular figure in Montrose. Neil Forbes was another midfielder who was loyal to Montrose for many years and in times of crisis at times. Steve Lennox was another midfielder who came to Links Park from Stoke City to be nearer his Aberdeen base. He chipped in with several goals from midfield. Also in midfield figured Neil Burke who like many before and since came from neighbours Arbroath. Up front we had a choice of Alex Wright a winger with plenty of pace, Colin O’Brien an ex Dunfermline player who signed from Berwick, and then there were four players any of whom could go like a bomb in our team nowadays. Martin Allan with his black mop of hair signed from Banks ‘o Dee and usually played what would now be in a No 8 position but with a very decent knack of finishing off at the right time. Then there were Mark Bennett, Martin Caithness and the redoubtable Doug Somner. Mark signed from Forfar West End and was second top scorer whereas Martin came from East Fife after a spell in England with Nottingham Forest. Yet another with a keen eye for goal who would be a rare commodity these days. Then there was Doug Somner a much travelled striker who joined us from Hamilton. He was a goal machine and even at age 33 when he came to LP he was a vital part of our title winning team in that never to be forgotten 1984/5 season. Others who appeared that season included Tony Duffy, Mick McManus, Gary Loch, Bobby Street, Keith Richards, Dougie Robb and a certain Dave Larter plus of course Ian Stewart himself. 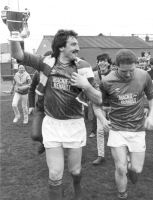 Manager Ian Stewart is still a Montrose legend. In the seasons before 1984/5 the Mo finished in third bottom and bottom and were the whipping boys for much of that time when the club were in crisis both on and off the field. Ian previously managed Arbroath but came to Montrose in 1983 when the process of shrewd signings and man management totally transformed a team of losers into winners and quite literally took Division Two by storm to the surprise of many in the Scottish game. He stayed until 1990 and during his time took his Montrose team to Tynecastle and pulled off a fantastic cup win against a Hearts team who had previously been unbeaten at Tynecastle for many games before. In all Ian had two playing spells at both Arbroath and Montrose but played most games for Forfar Athletic. He is pictured on the front cover of our 125th Anniversary programme for the game against Aberdeen on 28th July 2004 and is seen proudly lifting the championship trophy in that 1984/5 end of season game. What a man, what a player, what a Manager.

That summarises the ‘class of 84/5’ but I would need a much bigger column to do justice to each member of that title winning squad. We might well be the team from the town with the second lowest population in the SPFL but if Brechin (who have the smallest population) can sustain League 1 soccer then so too can we. I look forward to our next title winning season – May 2014?