They might not have won any silverware but this was a great squad – that of 1990/1.

Having said that, they very nearly did win the Second Division that season and certainly went as close to winning the Second Division as any other Mo squad apart from the squad of 1984/5 who are the only Mo squad ever to lift a title. Yes, this 1990/1 squad were denied the title only because of an exceptional Stirling Albion side who swept all before them and only lost 5 league games all season. Montrose on the other hand lost 13 league games but our consolation was that we finished in second place and in so doing gained promotion to the First Division (second tier) for the third and last time, so far. 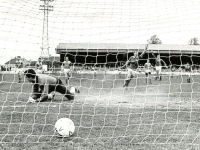 There was a gap of 8 points between us and the Binos at the end of the season but bear in mind we lost all three games against them, including two of them at Links Park so that gap would have been a lot closer even in a 2 points for a win season if we had fared better against them. Take nothing away from the squad of joint managers Chic McLelland and Doug Rougvie however because finishing second and gaining promotion looked far from possible at Christmas with us lying in 10th place out of 14. A strong resurgence in the back straight of the season blitzed almost all opposition aside however as the Mo won 14 of their last 22 games and lost only 3, two of which were to Stirling and the other away at Alloa. 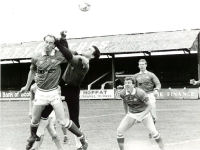 So who were the backbone of the 90/1 squad? In goal was the never to be forgotten Dave Larter the Edinburgh lad who made well over 100 appearances for Montrose after a brief dalliance with the other bunch just down the road. Full backs were Bruce Morrison and Steven King. Bruce came from Buckie Thistle in 1988 and as a typical Highlander he was ruthless in the tackle. Steven also came from a Highland League side Rothes and was an almost ever present in the side – another no nonsense defender. John Fleming was another left side full back who was also nicked from Arbroath in a swap deal involving Danny Powell going the other way. There were a number of what we would now call midfielders but one who could only be described as an out and out centre half was joint player/manager Doug Rougvie. He was the first signing after new Chairman Brian Keith took over and Doug was signed from Dunfermline Athletic but his main club was Aberdeen with whom he won full International honours for Scotland and played a vital part in Aberdeen’s European exploits including that famous Cup Winners Cup triumph in 1983. Midfielders were Andy Dolan, Colin Maver, Alan Lyons and Ivo den Bieman although Ivo played very much as we say nowadays ‘in the hole’ just behind the strikers. Andy Dolan was signed from junior side Dundee East Craigie but suffered a bad injury which curtailed his game time with the Mo. Colin Maver was a great favourite with the LP crowd as an all action player mainly as a goal scoring wide/wing player who came to us from Highland League side Keith. Alan Lyons needs no introduction to older fans as he was club captain and a tireless box to box player. Nicknamed ‘Lennie’ he played well over 125 times for the Mo after also playing for Aberdeen, St Johnstone and Forfar. Ivo den Bieman also needs little introduction as he was another LP favourite. He was the only Dutch player playing in Scottish senior football at the time and signed from Dutch second division side S. Eleons. His strong over 6 foot build made him a constant threat to opposition defences. 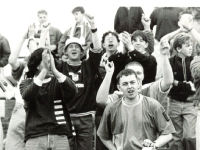 Up front were three players who would be eagerly sought after nowadays. When Martin Allan signed from Banks ‘o Dee he started off in midfield but later pushed up as he was very adept at holding the ball up front and bringing others into play. Yet another crowd favourite he also chipped in with goals and made over 200 appearances for the Mo. Gary Murray was an out and out striker who topped our goal scoring charts two seasons running and nicked 22 in one of those seasons. He had earlier spells with Hibernian and Forfar. Jimmy Fotheringham was a pacey forward who drifted inside and out wide to great effect to give us constant movement of the sort which kept opposition defences at sixes and sevens as they were pulled out of position. A player of my own heart as I’m a great advocate of pacey movement and proactive running both on and off the ball up front – something I think is lacking in the modern game. Jimmy had and I think has great connections with Forfar and also played for Arbroath before coming to LP from Forfar for a fee reputed to be £9000. 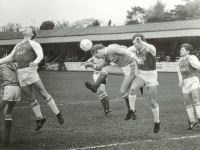 There were other good squad players as well. Bradley Kerr comes to mind. A skilful midfielder from Arbroath and David Melville an attacking midfielder who signed from St Andrews United in November 1990. He played mainly reserve team football but was a reliable squad member in that very successful season. In all 50 players were used including John Sheran but in the space we have we can’t ‘piccie’ them all unfortunately.

We can’t finish without another mention of Chic McLelland however. When he took over as join manager with Doug Rougvie they followed the great Ian Stewart so were on a hiding to nothing as they say. Chic and Doug hit the ground running as they silenced what critics there might have been by orchestrating that second half season surge to promotion. Chic was already on the books as a player so knew the club well and he also knew the shortcomings on the field. I remember them well.