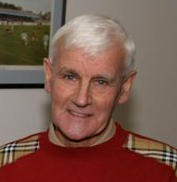 Even if you seldom or never come into the main stand at Links Park you will probably know or certainly have heard of ‘Brem.’  He is a fan with Mo blood flowing through his veins if ever there was one. He seems to spend a large part of his life in and around the stadium and getting stuck in behind the scenes on a match day from start to finish. These days he spends his time organising things ‘upstairs’ in the Willie Johnstone lounge before, during and after a home game. The names of those attending via the lounge are recorded. Have they paid or are they sneaking in? Got to have names on a list so that enough pies, sarnies, cups and saucers are there and ready for half time. These days you get a half time voucher as well in case of sneakers in – quite right too. When all is under control in the WJ, Brem ventures out into the seating area to distribute team sheets to the media people (and people like me who cadge one off him) before going back inside to make sure those in the WJ are behaving themselves – and have signed in! These are probably only a few of the things he does but the point is, clubs like ours need lads like Brem Bruce and younger volunteers like Chris Smith who work tirelessly for the cause.

In amongst his numbers for pies and cups and saucers lists, team sheets and so on I caught up with him and asked him a few of my usual questions. Here are some of his thoughts given briefly – well he had his signing in list to attend to, then the pies and those possible sneakers in.

How long have you been coming to Links Park?

What are your duties at Links Park?

Steward in the Willie Johnstone lounge.

Do you go to any away games these days?

What do you think are the main reasons why attendances have dropped?

Looking back, which period in time do you remember best?

Which players do you remember stood out?

Which players irrespective of their ability do you think were the real characters?

Who was the most outstanding Manager Montrose ever had?

Pick a highlight, one which immediately springs to mind, something you will never forget.

The epic cup games against Hearts and Hibs.

Is there a particular game or moment you will never forget but for all the wrong reasons?

Brem missed out on this question, he just loves the club so much.

Which other team’s result is the first you look out for?

Do you think we should stick with 10 team divisions or go back to bigger divisions?

Bigger divisions playing each other twice only.

Who was Montrose’s best ever player in your time?

The Kemp brothers, Bobby and Jimmy.

Any other snippets you want to share with us?

Almost got a game for Queen of the South against Montrose when they were short of players.

(Ed; I still think that’s a wind up but I have my ‘mole’ at QoS checking it out and an article in this series will follow shortly from an ex QoS player from the 1960’swho will recall his encounters against the Mighty Mo).

Thanks Brem, keep up the good work and keep the pies coming, the place would never be the same without you.