Time Tunnel see’s it from an opponent’s point of view. 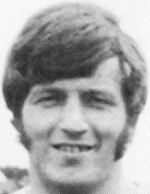 So far this season we’ve had and will continue to have opinions from Montrose fans, ex-players, ex-managers, club volunteers and backroom staff. This week however we’re featuring some ‘blasts from the past’ as seen by an ex-player who never played for the MO but who played against us on several occasions back in the 1960’s and 1970’s.

Lex Law was a one club man in senior football and signed for Queen of the South in 1964 and remained loyal to Queens until his final season there in 1975/6. He was what we would then have called an inside forward  and scored 68 goals for Queens but I dare not ask him how many were against the Mo – I fear the answer! Playing for Queens was very much a family thing. To begin with his father Jacky Law played for them from 1937 to 1949. Lex’s brother Jacky Law Jnr also played for Queens from 1962 to 1967 so also played against the Mo. Lex  had admirers in the football world, indeed there were I’m told, numerous transfer enquiries but he had a good job as a PE teacher in the area and to give all that up for a jump into the unknown must have been a torment going on in his mind more than once. I bet he still wonders, what if? Lex says ‘ I retired from football in 1976 and then devoted more time to teaching PE at the same school for 35 years in Carlisle.  I am proud of the fact that we produced lots of good professional footballers who played for big clubs – and even one manager!  These days I rarely miss a Hearts game at Tynecastle as despite my Queens connections Hearts were always my boyhood team.

HIS MEMORIES OF GAMES AGAINST MONTROSE

This is how Lex recalls his playing days and against Montrose in particular:-
Despite the odd freak result, games against Montrose were always difficult. As a team they were well organised and over the years they had some very good footballers. As a result they were always a hard team to beat. I always remember playing at Links Park. The ground was nice and compact and despite small crowds there was a good atmosphere. On one occasion I remember taking a throw in when just before I released the ball, one of the spectators tapped me on the shoulder and wished me luck! (Ed: Ok who was it, about time you owned up!).  Queen of the South had many good players in my time. Three that I consider to be the best were Alan Ball (goalkeeper), John Murphy a tough tackling midfielder and my brother Jacky Law, a superb winger. Alan Ball would undoubtedly have played for Scotland if he’d been Scottish and ranked alongside Ray Henderson who played for Queens in the 1950’s and who was widely acclaimed as one of the best uncapped keepers of his time.  I enjoyed playing in the 60’s and 70’s and have fond memories of that period and yes, I do also have a soft spot for Montrose. We were always made very welcome and were always given a hard match there and as a result we treated the Mo with a healthy respect. I played against Montrose many times and played against and read about many of their players. My memory fades but I’m sure me and my brother had a hand in two sixes and a seven against the Mo but they were freak results as Montrose had many great players themselves. Dennis D’Arcy as I recollect was a very dominant central defender who never gave an inch. Solid as a rock and built like one. Bobby Livingstone was very similar to myself in that he only ever played for one senior club. He was a terrific goalscorer and we always found it hard to shut him out of a game. Gordon Crammond was another who springs to mind. Small in stature like myself and very left sided but he had one attribute I didn’t have, the ability to tackle hard. The list could go on.’

I played for Scotland in the Junior World Cup in Germany and it was a tremendous feeling to pull on the Scottish jersey and to have played alongside the great Willie Johnstone and Peter McCloy of Rangers. Johan Cruyff was in the Dutch junior side that year.

Looking at the Scottish game today I think it would be better to go back to the old system with larger leagues playing each other twice only.

Recently Lex re-visited every ground in the 4 divisions in one season. A trip down memory lane but the Montrose trip was an amazing one. Lex arrived at Links Park in beautiful sunshine and a clear blue sky, watched the warm up, got a pie, sat down and then heard at 2.55pm the game was off as it was too windy (Ed: it was QP last season, I was there as well!). Eventually Lex intends to write a book on his experience down memory lane and promises me that Montrose will get a favourable mention.

A lovely fella and a proud grandfather now but Lex, I don’t ever want to know how many goals you and your brother netted against us. That might just make me not like you any more!