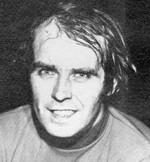 Kenny has been described as one of the ‘Montrose Greats’ or as a ‘Legend.’ Those who remember Kenny as a player and latterly as a Manager will immediately agree with one or both of those statements. His son Dougie plays left back for us this season so ‘dad’ Cameron is a regular visitor to Links Park and Flashback caught up with him to turn the clock back a good few years.

Before we start though it is worth remembering how it all started. The Mo were at the start of a ‘crest of the wave’ era in the mid 70’s but leading scorer Brian Third had just been sold to St Mirren. How could anybody replace that goal scoring machine? Enter Kenny Cameron from Dundee United – a fantastic signing for manager Alec Stuart. Kenny quickly struck up a formidable partnership up front with Bobby Livingstone as he scored 30 goals at an average of more than 1 every 3 games. At a mere 5’9’’ he was not the biggest of centre forwards but as our present Martin Boyle will tell you it’s not size that counts but pace and positional sense as well. Kenny went on to replace Alec Stuart as manager when the latter moved on to Ayr United, then a top flight club.

Here’s how Kenny handled a few questions fired at his memory banks (and a remaining mystery).

Dundee, Kilmarnock, Dundee United and then Montrose in playing/coaching/management roles.

Tell us about a highlight from your days at Montrose.

Taking Hearts to three games in the quarter-final of the Scottish Cup before finally losing out late on in the third game at Muirton Park. It was the only time Hearts actually led in the long running tie.

The League Cup Semi-final tie against Rangers at Hampden – tell us about it and what manager Alec Stuart said at half time as we led 1-0.

This is the mystery. Kenny replied by saying he was not involved. That surprised me as he is featured in the match programme even a picture of him and I have a match report somewhere. I was certain he played a part but I did not labour the point. It will remain a mystery.

Any Montrose cringe moments you care to recall?

Down 0-3 to Raith Rovers after the first leg of a League Cup tie – we were awful. That though turned out to be another highlight however as we turned it around and won the second leg at Links Park 5-1 to go through 5-4 on aggregate.

Who were the jokers in the dressing room?

Who were the nightmares in the dressing room?

Nobody. There was a great team spirit. Fantastic lads.

Tell us about a couple of players who could and should have played at a higher level.

Who looked after his appearance best?

Which was your favourite away ground and why?

Do you still get to watch Montrose these days?

My son Douglas plays for Montrose so I go to most home games with my wife Jean.

What do you think is best, small divisions as now or bigger divisions playing each other twice only?

Under the present economic climate I would like to see leagues in areas/regions with more local travelling.

What are you most proud of in your total football career?

No, none. I was fortunate to be involved in senior football for 45 years.

Anything else you would like to mention about your time at Montrose?

The great thing for me personally is that I can remember all of that era and can vouch for everything Kenny says – it was a truly wonderful time for Montrose FC and us fans. Those of us old enough to remember will forever be indebted to Kenny and all those he mentions for giving us so much pleasure, yet, it somehow does not seem like 30 odd years ago.

Thanks for the memories Kenny and best wishes to you and your family as life goes on.