TIME TUNNEL …… In the tunnel today is  Robert Ogg. 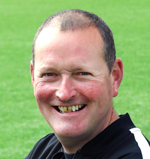 Robert Ogg will be well known to most Mo fans as he seems to be all over the place during home games. One minute you can see him scurrying along the touchline to the club shop delivering and collecting things. Then he’s off somewhere else, maybe down the touchline again – a corner flag isn’t straight maybe, anyway whatever it is it’ll be important and somebody has to do it. That somebody is Robert Ogg. When everything seems to be in order we can get started and Robert who I’ve never seen wearing anything other than his Mo tracksuit, stands in the tunnel entrance with kitman Ron Marquis – you see Robert is the assistant kitman as well. For those of us who go to away games he’s there too. Not so much scurrying around but never far from the dugout and/or the dressing room entrance.

So what does he really do at LP on matchdays and how did he become such a Mo nutcase like the rest of us. Time Tunnel caught up with him and managed to get his story one question at a time each time he rushed past.

The first thing we want to know is what exactly do you do on matchdays at LP?

Deep intake of breath – where to start he says. Collect the pies etc then put out supplies of programmes upstairs. Ensure enough are in the shop and that they have a small supply of teamsheets – which is one of the rushing down the touchline jobs. Then make sure the pitch is ready for the game. Most of that pitch work done earlier but have to last minute check.

The timing of things leading up to kick off must be tight – tell us how it works.

Well, most of the kit is set up first thing on a Saturday morning, the outside things are done after the kids have all gone. Then the players arrive by 1.30pm, that’s the busy time right through to 3.00pm

Have you always lived in the area and how did you start supporting Montrose?

Have lived in Laurencekirk all my life. Supporting the Mo comes from other family members and I’ve always done it – it’s normal. (Ed: That’s what I think as well, except I don’t live in Laurencekirk – but I still regard it as normal after all this time).

The supporters club seems to be thriving a bit better nowadays. How important do you think that is?

I think it’s very important that the Football club and the supporters club get on well together.

Do you keep a record of all the Mo games you go to or keep programmes or whatever?

For home games a programme and teamsheet. Try to do the same for away games too plus a badge if I can get one.

Tell us about your day job (if you have time for one).

I know you go to lots of away games, which are your favourite days out?

Favourite away trip has to be Berwick Rangers. Some great people there.

Pick a highlight or two from your past Mo watching days.

Promotion twice at Dumfries and Cowdenbeath.

Is there a ‘lowlight’ you care to mention?

Tommy Campbell being at the club was a lowlight for me.

Which other teams’ result is the first you look out for?

Notts County. My mother’s side of the family come from Nottingham. My brother is a Forest fan but we won’t say too much about that (Ed: Dearie me!)

How would you like to see the SPL/SFL re-structured or are you happy the way it is?

I think it should stay the way it is, things happen in football and the small teams don’t get much say in what the SPL do.

Finally, who in your opinion was the greatest ever servant of Montrose FC – name more than one if you wish.

And very finally, just to say that this is not the first time Robert Ogg has been featured in a Montrose programme. After I’d interviewed him I came across an old one from the 1990’s. His favourite player then believe it or not was David Larter closely followed by Gary Murray. His favourite other team though was maybe Man Utd as he said he would pay extra to watch any of their players. His least favourite stadium was Cliftonhill (Albion Rovers). His best (up to the mid 1990’s) Montrose team was Larter, Morrison, Fleming, King, M. Craib, Allan, Den Bieman, Maver, McDonald, Murray and Grant. His comments on the programme – want more info and less adverts. Anything you would like to change – yes, make player sponsorship cheaper so more ordinary fans can afford it. Maybe a thought nowadays as well – partial sponsorship maybe?

Thanks Robert, keep up the good work, see you soon.