A Tribute to a Montrose FC Hero - RONNIE CROSS
August 2008 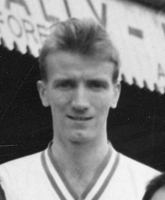 Former Montrose FC player and scout Ronnie Cross died recently at the age of 76.
It is a measure of the affection and esteem that those connected with Montrose FC felt for Ronnie that so many people with football connections gathered at his funeral service to pay tribute to him. Many of those who attended were players whose careers were furthered by Ronnie through his ability to spot talent worthy of the senior game. Among those who were there to pay their last respects to Ronnie were his former team mates, George Russell, Willie Nicoll and Johnny Carroll, while from the 1970s were some of the players that he brought to Links Park such as Denis D'Arcy, Alex Wright, Bobby Livingstone and John Sheran.
It was over fifty years ago, away back in February 1957 that Ronnie, along with his friend Johnny Carroll, joined the Gable Endies from junior side Aberdeen Sunnybank. The manager then was George Hill but it was when Norman Christie took over that Ronnie and the team came to the fore with the side developing into one of the stronger outfits in the Second Division. Always a whole-hearted player, Ronnie was a tremendous servant who was totally committed to the Gable Endies cause.
After one game the Review reported; "Cross was not as good as usual but nevertheless gave a display which made him worthy of his place."
Another newspaper described Ronnie as 'The quiet man of football,' and that is certainly true. Never showy but always willing to give his all. That same report pointed out that in his long playing career Ronnie had played everywhere for Montrose except goalkeeper and centre-half. Presumably that is only because he was never asked to play in those positions.
Ronnie was a regular in the side during the sixties as Montrose fought for promotion to the then top division. Although they came close they never quite made it, although it was not for want of trying.
When Ronnie was the subject of a Links Park Legend's feature in the programme the first game he recalled was the match against promotion rivals Dundee United played at Links Park in March 1960 when over 6,000 people paid at the turnstiles. Some United supporters unlocked one of the big gates and, although a number of supporters did go back to the turnstiles to pay, many hundreds more got into the ground without paying. If the Club lost some badly needed income that day they also lost the services of captain Jimmy Kilgannon for part of the game with a head injury. There were no substitutes in those days and, although Kilgannon eventually returned to the field, the Gable Endies lost 3-1.
Ronnie also played in the cup-tie against Celtic at Celtic Park in 1961. Montrose struggled that day, and despite playing some attractive football, lost by six goals to nil.
By 1962 Ronnie and team-mate Frank Sandeman were entitled to a benefit and they both received tankards from the Supporters Club in recognition of their loyalty. Montrose met the cup-holders Dunfermline at Links Park in the benefit game arranged for the two players. A crowd of over 900 watched the Gable Endies win what was a fairly competitive match for a 'friendly' by three goals to two.
During season 1967-68 Ronnie was released and went to play in the Highland League for a spell.
The arrival of Alex Stuart as manager resulted in the shake up behind the scenes at Links Park which saw Ronnie appointed as the Gable Endies scout in the Aberdeen area, a position he held for almost 20 years. His knowledge of the Aberdeen junior scene was second to none and that, coupled with Montrose's policy of paying a percentage of any future transfer fee to a player's junior club, meant that before long Ronnie was sending a steady stream of outstanding players to Montrose.
In one of my conversations with Les Barr he remarked on the 'conveyor belt' of good players that came to the Club during that period. The list of players is an impressive one, and certainly too long to list in full. Suffice to say that, Kenny Watson, Bobby Hutchison, Roy Strathdee, Derek Daun, Denis D'Arcy and John Sheran, were just some of the talented players brought to Links Park by Ronnie during the glory years that were the 1970s.
Ronnie also scouted in the Highland League and he was responsible for bringing top scorer Brian Third to Montrose. During that wonderful period in the Club's history, when Montrose could compete on equal terms with any club in Scotland, players were sold on and yet the standard of the team remained consistently high.
Although Alex Stuart can take credit for the performances on the pitch there can be no doubt that Ronnie's undoubted ability to identify potential talent and convince players that their future lay at Links Park also played a large part in the team's success.
But perhaps the best way to sum up Ronnie's commitment to Montrose and his love of the game was the fact that for a spell, in addition to his scouting work, he also drove the mini-bus which brought the players from Aberdeen for training twice per week.
A remarkable man who contributed so much to Montrose Football Club, he will be sadly missed by all who knew him. Ronnie is survived by his wife Helen, also a lifelong supporter of the club.