After dominating the first 45 minutes Montrose still managed to go in at half time a goal down as there were seven added minutes following a long injury delay just before the 45 were up. It was that long break in play which looked to destroy the rhythm Montrose had built up but the injury to Andy Jackson looked a bad one and first and foremost we wish the lad well as it is never nice to see any player hurt like that.

It was however a game Montrose could and should have won but you don’t win games unless you score and at present that’s a major problem. Montrose lined up with a back four of Ballantyne, Allan, Dillon and Steeves in front of Lennox in goal. Midfield had Watson alongside Callaghan and young Ballantyne on loan from St Johnstone. Up front had a very youthful and inexperienced look about it in Lyons, Rennie and MacBeath on loan from Ross County.

Those youngsters up front certainly looked a threat in the first half and refreshingly created chances with very direct running as Montrose pushed forward with purpose. A bit of inexperience came up against some experienced Forfar defending however and the break Montrose wanted just would not come. There was a good Montrose support in a crowd of 670.

In the first attack of the game MacBeath was dispossessed on the edge of the box when about to pull the trigger then a Lyons shot from 18 yards was saved low down by McCallum. Forbes beat the offside trap at the other end but ran out of pitch and the chance evaporated. Cammy Ballantyne the full back won a midfield battle and set up MacBeath who dragged his shot wide and it was MacBeath again moments later who under pressure headed over a Steeves cross. It was all Montrose well into the first half and a couple of corners were wasted before Lyons used speed to burst into the box and somehow McCallum blocked the shot which was then hacked away for another corner which was overhit. Lyons and MacBeath were a handful for the Forfar defence and probing from another youngster Cammy Ballantyne the midfielder gave the impression a Montrose goal just had to come.

In a rare Forfar attack Forbes hit a 25 yarder which Lennox watched go past the post. Lyons again had a half chance as MacBeath fed it through to him but it bobbled amongst defenders in a crowded box before spinning out to Watson whose first time shot went wide. Then the best chance so far after 30 minutes as a good cross from Ballantyne out wide on the right into a crowd in the box was met by a Montrose boot and looked in all the way until McCallum parried it away to safety.
It was almost non stop Montrose pressure then the unfortunate injury to Andy Jackson. It looked like a clash of heads, no free kick was given but referee Chris Fordyce rightly stopped play when Jackson looked to be in trouble on the ground.

That interrupted the Montrose rhythm and they never really recovered from that. When play resumed with Currie replacing Jackson Forfar took advantage of the breather and for the first time had a purple patch of play. They moved it through midfield and Lennox spilled the shot but Watson hacked it for a corner. As the ball came over it was half cleared but right to MARK DOCHERTY 15 yards out and his hard shot found the net to make it 1-0 in the seventh minute of stoppage time. It was hard on Montrose, but that’s football.

The second half started with Forfar continuing on the front foot. Long balls in the air from Montrose were easily dealt with by the Forfar back line. In an effort to change things Montrose brought on Johnston to replace MacBeath. But Forfar almost doubled their lead as Kirkpatrick rose highest and a good header had Lennox pushing it out for a corner which came to nothing. Forfar were now on top as Montrose failed to regain their rhythm and relied more on long balls which were ‘food and drink’ to Forfar. Watson saw yellow for a foul in midfield as Montrose became more frantic looking for a breakthrough. Seventy minutes came, Watson was subbed by Waddell as Montrose went to three at the back with Ballantyne and Steeves pushing up higher as wing backs. Rennie came off for Ross Campbell as Montrose ‘threw the kitchen sink’ at Forfar. The loons calmed things down by making their final two substitutions to break up play in the 84th and 86th minutes.

Then the final blow to Montrose as Forfar broke clear with most Montrose players camped in the Forfar box. A left wing scamper and cross found JAMIE BAIN all on his own 25 yards out in a central position and he picked his spot to make it 2-0 right at the death – well almost as Ross Campbell somehow hit the underside of the bar from 6 yards after that and just before the final whistle.

A sad defeat maybe but this Montrose side is not a bad team. This squad might well struggle in a tough League 1 this season but with a bit more experience together they will improve and even now they would ‘walk’ through League 2, such is the difference in standard. There are no easy points in League 1. No shortage of effort today but it’s goals that win games.

Finally, as well as wishing injured Andy Jackson well we at Montrose also send our best wishes to Jim Weir and coach Barry Sellars who were both injured in a car crash earlier in the week. We wish all a speedy and full recovery. 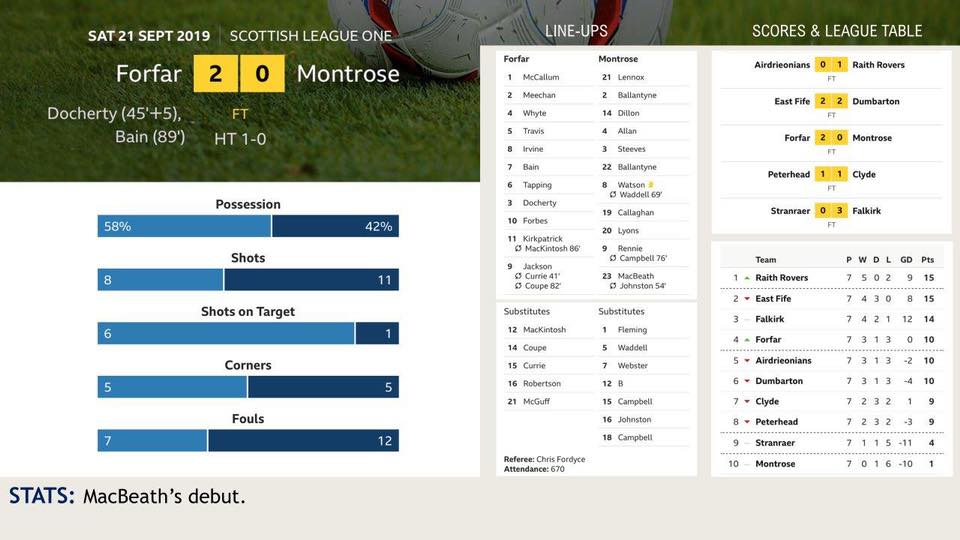