It was a more settled Montrose side which started the game at Broadwood as Manager Stewart Petrie kept faith with his line up. There were changes on the bench however as Fleming was missing his wife having had a baby just a couple of days before – congratulations to both of them. Also making the bench were new loan signings Shaun Struthers and Mouhamed Niang who appeared to be known as Sena on the on the pitch and with the large Montrose travelling support in a crowd of 721. It has to be said that the Mo travelling support is immense these days and must lift the players.

Referee was Steven Kirkland but missing from the Clyde side was David Goodwillie who was suspended.

The game started very quietly and it was fully four minutes before either side launched a serious attack. That was Clyde down the centre followed by a weak shot which was deflected for a corner punched away by Lennox or at least partly punched away with Ballantyne of old completing the tidy up. Montrose swept quickly up the other end but too quickly for the nearside linesman who called a halt with his offside flag. Undeterred Montrose tried again with Webster beating his man down the right before having his shot beaten out. It was Webster again moments later as he got on the end of a vicious cross from Steeves but the volley soared over the bar. This flurry of Montrose attacking brought the best out of Hamish – I’m sure you will know what I mean.

Montrose continued to have the better of the first half as Clyde struggled to string anything together. Webster had a free kick from just outside the box blocked and Watson was about to pull the trigger from 25 yards when his effort was blocked at source. Then the Mo pressure almost paid off as Lyons went on a great run down the left and his cross was met by McBeath and destined for the back of the net but hit Webster on the way and went wide.

Meanwhile Clyde did have another attack and Lennox had to move smartly to clear the danger with Dillon completing the tidy up this time and not only that but his long ball downfield had McBeath swivelling in the box and seeing his effort agonisingly trundle past the wrong side of the post.

Then the first yellow card of the game as Dillon was adjudged to have sinned over on the far side. Then a similar incident also on the far side had Lyons brought down but no card this time.

Montrose had to beware of being caught off guard and indeed Clyde did have the ball in the net first but an offside flag saved the day. That was following a set piece and Montrose do still seem to struggle in dealing with such set pieces.

As the game looked to be drifting to a goal-less first half it suddenly sprung into decisive action. Matty Allan sent Cammy Ballantyne of old scampering into the opposition penalty area where he was brought down in full flight. A clear penalty but strangely no card for the awful tackle. The penalty was converted smoothly by GRAHAM WEBSTER to male it 1-0 after 41 minutes. Could Montrose hold that lead going into the interval? The answer was yes they could and not only that but increase the lead to 2-0 after 44 minutes when Cammy of old again scampered through the mid right-hand side. Again he was crudely brought down (again no card) but referee Kirkland played advantage as Cammy the younger latched onto the ball, swept it hard and low for young JOEL McBEATH to sweep it in from point blank range under pressure.

The second half started with Clyde looking to gain more possession but this Montrose side was determined to stand strong and use the pace of their youngsters up front to ring alarm bells in the Clyde defence with both Lyons and McBeath running their socks off. Dillon and Co. were almost caught however by a clever dummy in the centre of their box but unfortunately for Clyde their own player was foxed by it as well. Webster was again unlucky as his shot from a tight angle grazed the post then Watson saw yellow for a late tackle which was no worse than the above mentioned tackles on Ballantyne.

Substitution ‘season’ started about the hour mark with Clyde replacing Cuddihy with Wallace and for Montrose Niang (aka Sena) came on for the yellow carded Watson. A few minutes later Montrose brought McBeath off with Rennie going on to break up a period of Clyde dominance.

Webster was next to see yellow as the Clyde keeper and he tangled for a loose ball outside the penalty area, a ball which Webster was fully entitled to compete for. Instead the ball was trapped beneath them and referee Kirkland booked both players for squaring up to each other. Montrose re-gained the upper hand as Cammy the younger hit a shot which was parried away with Steeves hitting a 30 yarder which was last seen a mile or two down the road. Both sides made further substitutions which for Montrose was Johnston on for Lyons as the Mo wound down the clock. The last flurries of action saw Callaghan booked for getting in the way of a free kick and Rennie being red carded for one can only think the referee considered to be an elbow offence. After 3 minutes stoppage time the referee had had enough and blew for a 2-0 win for the Mo.

With additions to the squad and key players coming back into the squad this Montrose side could do without a weeks’ break next weekend but buoyed by two successive wins it must be carried forward to Airdrie on 19th October. A well deserved win with no obvious weak links. 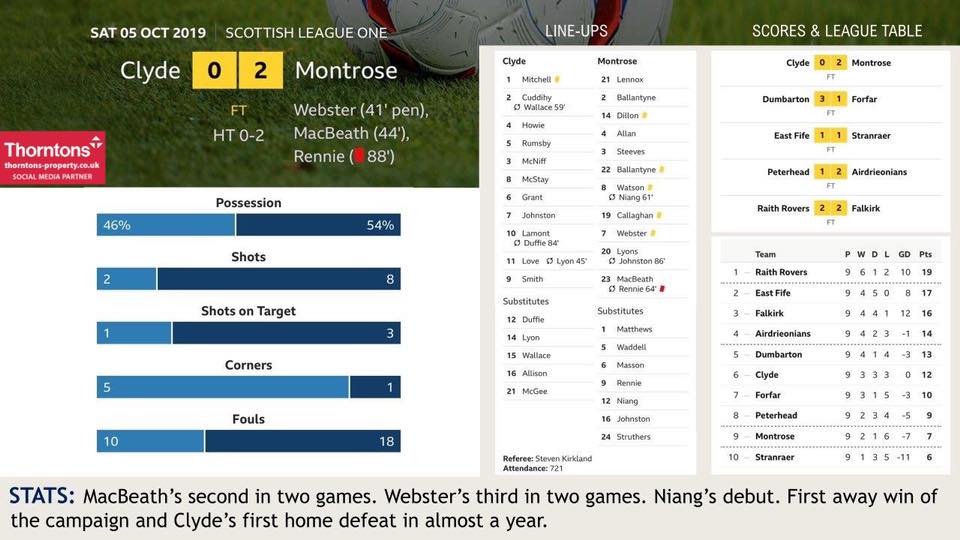