A great away day from the Mighty Mo to extend their winning run to an incredible 5 games and once again a good away following in a crowd of 704.

The Fifers almost took the lead from the first attack of the game but Denholm’s shot was smothered by Lennox at the foot of the post. It was Denholm again who managed to clear the bar from close range when a goal looked more likely and East Fife were later to pay for those misses.

For Montrose Webster was troubling the Fifers defence all afternoon and he had the first strike on goal from 25 yards which keeper Hart held. Back came East Fife with Denholm again the trouble-maker but his cross come shot had no takers at the far post.

It became end to end stuff as Montrose got more into the game as both Webster and Callaghan had chances, the latter particularly might have done better after MacBeath set him up nicely inside the box. Lots of action and still inside the first 15 minutes.

Montrose won two corners and from the first East Fife cleared and swarmed downfield in numbers but Dillon thwarted them and his long ball brought another corner for Montrose. End to end stuff. Cammy Ballantyne at this point was not able to do his usual wing back role as his hands were full just defending the fast tricky Denholm as East Fife attacked impressively. Yet it was Montrose who also created chances as well to worry the home fans.

The telling first goal came as a long ball down the left was held up nicely by MacBeath who fed Sena and in turn fed GRAHAM WEBSTER whose shot across the keeper from the right nestled neatly in the far bottom corner to make it 1-0 to Montrose after 37 minutes.

Cue East Fife pressure which Steeves halted and got yellow carded for his efforts. Moments later Sena for Montrose was similarly upended but no card this time. Nevertheless at 1-0 half-time it was looking good for the Mo.

Surprisingly the second half started slowly and it was Montrose who earned the first corner of the half but it was hit too long. Then East Fife won a corner as Lennox tipped over a stinging 25 yard shot and that lead to another 25 yard shot well wide. Then a huge let off for East Fife as Webster crossed for Masson just outside the box. His shot cannoned back as it looked goal bound and Lyons tried to force the rebound in but that also was deflected for a corner.

Montrose did finally have it in the net again but a linesman’s flag ruled it out. East fife were becoming desperate as the clock wound down and their undefeated record looked in danger.

Montrose dropped deeper but kept East Fife at arm’s length whilst at the same time themselves creating chances. Webster again rattled them and it took keeper Hart’s finger tips to prevent another score.

The last 10 minutes were desperate for East Fife, a shot was charged down by the massed Montrose defenders. Sena was showing Mo fans what a good prospect he is as he settled into the side well and it was his determination that almost led to a breakaway goal for Masson but his shot agonisingly went the wrong side of the post.

No matter as the last couple of East Fife attacks passed without any trouble as the final whistle sounded just over 4 minutes into stoppage time. A fifth successive win for Montrose and a third successive away win, this time by 1-0 and thoroughly deserved. 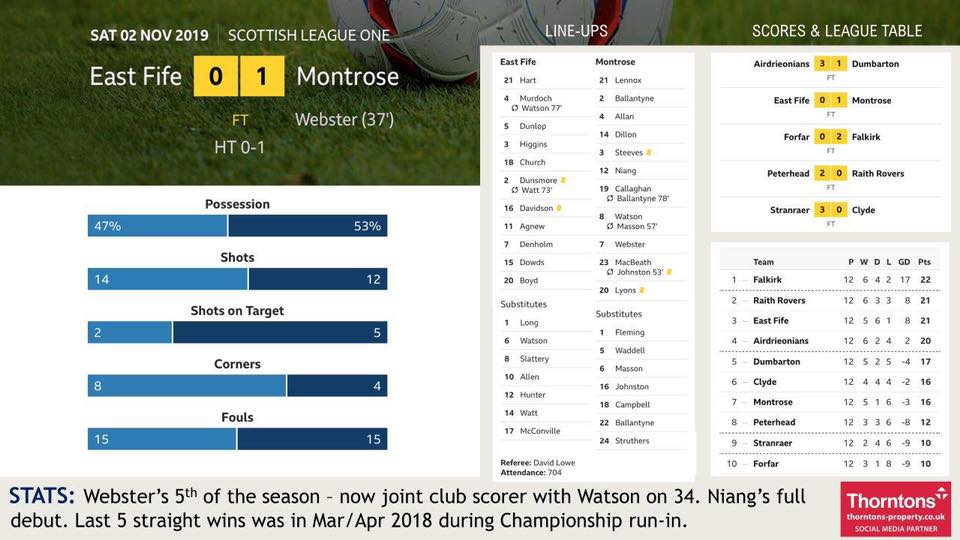