With Paul Watson fit again it was an unchanged starting line up with him replacing Johnston on the bench. Yet again a great Mo away following to swell the crowd to 717 on an unusually non-windy day at Balmoor.

Referee Gavin Duncan got the game underway but relatively little of significance happened early on as each side treated the other with respect and clearly wanted to make no early mistakes. Montrose were trying to equal their best ever run of successive league wins whilst Peterhead had started a good run of their own and were determined to keep that going. A perfect recipe for a tight game maybe lacking a bit of flair and that’s exactly how it played out.

The first half chance fell to danger man McAllister on the 18 yard line as it fell nicely for him but his hard hit shot was blocked and sent for a corner which came to nothing. The same player had the next opening several minutes later but Dillon was alert and cleared the danger. Montrose looked content to soak up early pressure and it was several minutes before they entered enemy territory with any intent. It was young Blair Lyons down the left but his run ended abruptly when brought down by Scott Brown who was yellow carded.

More pressure from Peterhead but Montrose coped with it cleanly and another McAllister effort was deflected for a corner which again was scrambled clear. McAllister it was again who won two quick fire free kicks just outside the 18 yard line and it appeared he went down somewhat softly to earn those free kicks. Lennox dealt with the first and the other went high and wide. Montrose were now relying on hitting on the break with both wing backs feeding wide runners Lyons and Webster and it was the latter who combined with Ballantyne to create the first real chance for Montrose but the ball ran out of play on what looked a very good but slick surface.

The second yellow card for Peterhead came on the half hour mark and again it was a flying Lyons who was upended by this time by Hooper. Rennie fired the free kick over the bar but from the goal kick Callaghan gained possession in midfield and hit a good effort which fizzed just wide.  Just before half-time there was still time for the third Peterhead yellow card as Jason Brown scythed down a charging Ballantyne. A somewhat uneventful first half ended 0-0 with neither goalkeeper being unduly troubled.

From the restart Montrose immediately had the ball in the net but the whistle had already gone for a foul in the box. McAllister found space but again Dillon denied him as play switched from end to end but still with no clear cut chances until the best chance fell to the home side as a McAllister header was sent across Lennox to Conray who was offside but missed the target anyway. Rennie who had a hard afternoon against a resolute Peterhead defence was replaced by Struthers on 58 minutes and shortly after Peterhead made their first change with Fraser on for Scott Brown. A chance for Montrose as Webster crossed for Masson who stretched but headed over.

At this point both Webster and Lyons were both being tightly marked to snuff out the danger to the home side but Montrose were doing the same to McAllister and Leitch as stalemate prevailed.

More changes were made with Smith on for Lyle for Peterhead as Montrose had their best spell of the game as it approached the 75 minute mark. Callaghan became the first Montrose yellow carded player of the day for what looked a 50/50 challenge but McAllister became the fourth Peterhead booking for a bad tackle on Dillon.

As the game entered the last 10 minutes Montrose made a double change with Watson and McBeath on for Webster and Callaghan to bring fresh legs both up front and into midfield. Niang (Sena) was booked for preventing a quick free kick but apart from that both sides seemed happy to play out stoppage time to each prolong their unbeaten runs. The winning streak for Montrose was ended but it is now an unbeaten league run of seven games instead.  0-0 the final score.

A break from league action next week but be sure to follow the lads to Bonnyrigg in the Scottish Cup in what is a tricky looking tie, but equally very winnable. 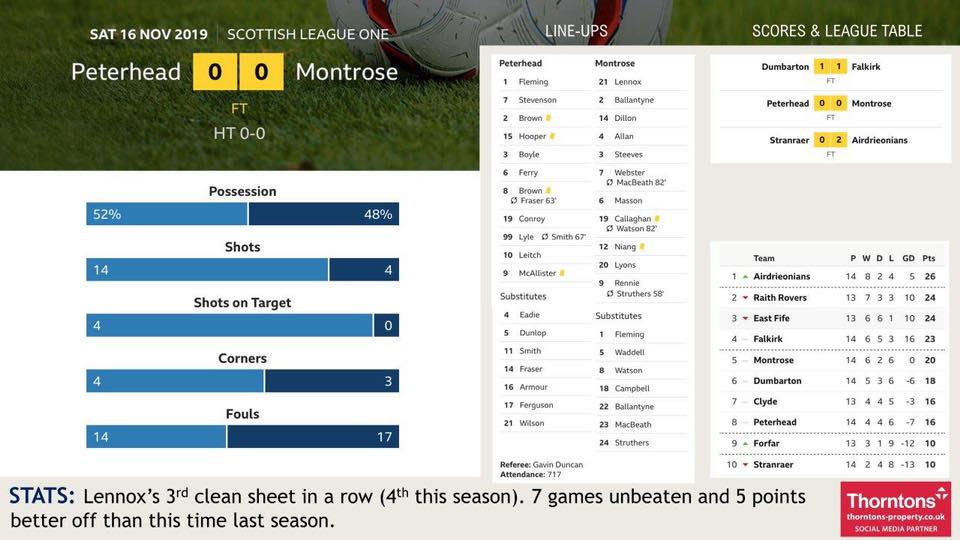