Montrose got back to winning ways at Links Park after a two week lay off and a difficult game at Raith. Blair Lyons was restored to the starting line up as was Mohammed Niang with new signings Aidan Quinn and Lewis Hawke both on the bench. Referee was Graham Beaton who started the game and it was not long before he had to start it again as Montrose had the ball in the back of the Peterhead net inside the first two minutes. A Montrose throw in by Cammy Ballantyne was helped on into the box for CAMMY F BALLANTYNE to run onto and hit a shot across keeper Greg Fleming to make it 1-0 to Montrose and a flying start.

Peterhead were stunned but soon started to get their act together with some good passing moves but without causing much of a problem at first. In fact it was a scrappy game until it sprung to life again after 15 minutes when Montrose scored again. A probing ball through the middle was latched onto by BLAIR LYONS who bundled his way between two defenders and used his speed to rifle it past Fleming to make it 2-0 to Montrose.

Although stunned again Peterhead still looked lively and had an extra weapon in No.3 Patrick Boyle with his long throw-ins which were to cause problems all through the game.

We had to wait 20 minutes for the first corner of the game which went to and was wasted by Montrose as Peterhead quickly switched play to the other end where Cook tried to lob Lennox but the effort went well wide. Then Lyle broke clear as it bounced well for him but again a good chance was wasted as Lennox parried it then collected.

Peterhead would rue those missed chances as Montrose scored again on 27 minutes. It was BLAIR LYONS again who got on the end of a pass by Craig Johnston inside the fullback and wriggled his way in from the left to hit a shot into the far bottom corner to make it 3-0 to Montrose.

With a three goal lead after half an hour you would think Montrose would be in a comfort zone – but Peterhead had other ideas. Back they came with two quick corners then Cook really should have scored as he got on the end of a cross unmarked but sent his header wide. The same player ALAN COOK made amends on the stroke of half-time however when he hit a thunderbolt shot at long range and which beat Lennox as it entered the centre of the net. So Peterhead had a lifeline just before the break.

For the second half McCarthy was replaced by Smith as Peterhead stepped up the pressure and it was Smith who should immediately have done better than shot wide from a good position.

Then the first yellow card of the game went to Terry Masson who won the ball but was adjudged to have tackled from behind. Cook took the free kick and although Lennox spilled it he recovered well to dive at the feet of the onrushing Cook who was soon after booked for dissent for suggesting referee Beaton had made a wrong decision.

The next goal was important and Peterhead looked the most likely as they pressed hard but Montrose cleared their lines several times to push Peterhead backwards. It was from a long clearance that Montrose won a free kick wide right and it was to prove decisive. The free kick was aimed at MATTY ALLAN who looped his header into the top corner to stretch the lead back to three goals and make it 4-1 after an hour played.

If Mo fans thought that was comfort zone again Peterhead had other ideas as they surged forward. Brown saw yellow for felling Lyons as Montrose made a double substitution to try to stem the Peterhead tide. On came Milne and new signing Hawke to replace Webster and Masson. Peterhead also made a change at the same time with Fraser on for Boyd. It worked for Peterhead as another troublesome long throw-in evaded the defenders and was hooked over Lennox by DEREK LYLE to pull it back to 4-2 after 68 minutes. All to play for now.

The final Montrose substitution came on 75 minutes with Johnston off and big Aidan Quinn on to do something about defending those long throw-ins. Meanwhile Cammy Ballantyne was fed up of defending and went on a terrific charge down the right but was dispossessed when about to shoot. It broke again for him however and his cross was headed wide by new boy Hawke. On the left wing Lyons also did the same and his mazy run almost paid dividends but the ball finally trickled just wide of the post. Niang then had a one on one but keeper Fleming denied him with an outstretched foot as a fifth Montrose goal with 10 minutes to go would surely have settled it. Instead back came Peterhead surging forward in numbers and a Quinn header in an attempt to clear yet another long throw-in went straight to SCOTT BROWN who volleyed it past Lennox to make it 4-3 with 10 minutes plus stoppage time to go.

Peterhead made their final substitution on 85 minutes with Ferguson on for Stevenson to give Mo fans a nervy end to the game. Jack Leitch should have levelled things in the 90th minute but hit over the bar when well placed then came the final throw of the dice. Referee Beaton pointed to the penalty spot as Jason Brown went sprawling when about to be challenged by Steeves. The latter and his colleagues were outraged and surrounded the linesman who consulted the referee who immediately changed the decision and booked Brown for simulation. A relief for Montrose but even after that Lennox saved again at the feet of Cook before Cammy Ballantyne made the game safe when running the final ball to the far corner flag and Mr. Beaton blew for time.

So at 4-3 to Montrose another 3 points in the bag and just a pity the momentum stops again next week with once again no game. 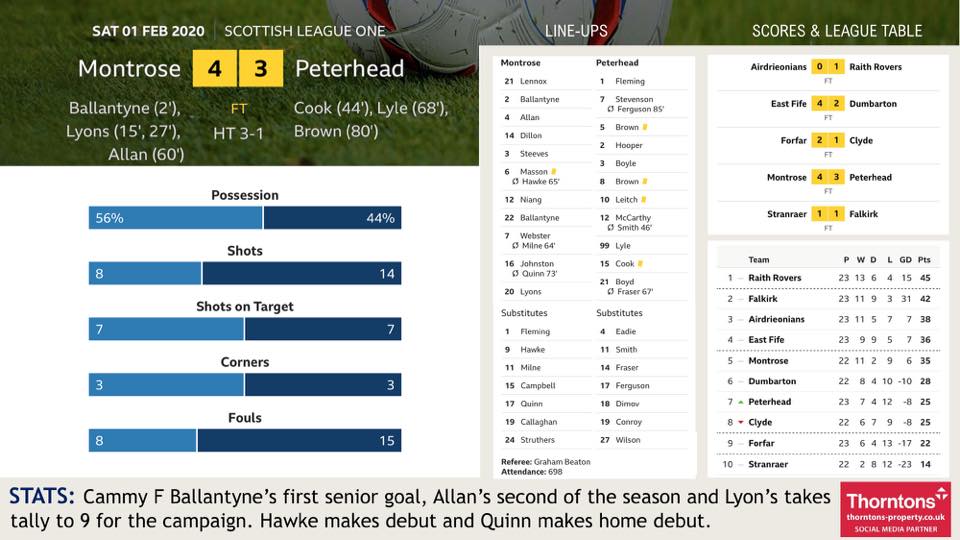