Lifelong Hibie fan Rev Dr Lawrence Whitley had a dream day out on Saturday as guest of Montrose FC Director Tom Murray. Lawrence was Minister of the Old Church in Montrose between 1985 and 2007 and as an avid football fan was a regular at Links Park during this time. Tom and Lawrence are pictured in the Easter Road Boardroom flanked by Directors Malcolm Watters and John Paton.

Fans are being given one last chance to grab a bargain ahead of our first competitive home match next week.

Early Bird Discounts are being extended until Tuesday, when we welcome Premiership outfit Ross County in the Betfred Cup, admission to which will be FREE for Season Ticket holders - so don't hang about....

Admission for non-season ticket holders will be Adults £12, OAP/U16's £6

Mo Boss Stewart Petrie has been delighted with how a group of his youth players have stepped up to the mark during the Clubs pre-season friendlies.

In particular, 17 year old Kieran Thomson has been the stand out performer, having waited patiently for over 8 months for his debut opportunity.

The product of Montrose Youth FC and having played for the Gable Endies U17 Club Academy side for last two seasons, the midfielder made the first team bench back in December away to Elgin City, but remained an unused substitute.

He warmed the bench further at home to both Cowdenbeath and Berwick in January, but had to wait until the second half of the recent Cove Rangers friendly to take to the park. His full debut came only days later against Championship side Dundee United before completing a dream fortnight playing in both Brechin and Aberdeen friendlies.

Petrie said, “Kieran has done fantastically well and is a credit to both our own youth coaches and Montrose Youth FC. In football it’s all about taking chances and, with our squad depleted due to holidays and injuries, we had to call on Kieran and he never let us down.

“He will continue working with our U17’s this year but I will be keeping a close eye on his progress and will take every opportunity to keep him involved with the first team.”

Youth team players Rohan Terrell, Fraser MacLeod, Euan Rose, Scott Glennie and Ryan Hunt also made their debuts from the bench during the pre-season friendlies and acquitted themselves extremely well.

With pre-season complete, we get down to business on Saturday away to Hibs and we could well be facing a familiar front line if former Mo youngsters Martin Boyle and Simon Murray feature for the Capital side.

Tickets are priced Adults £15 and Concessions £10

Montrose FC Assistant Manager Ross Campbell has agreed to extend his contract for two years keeping him at the Club until summer 2019.

Appointed in February by Gable Endies Boss Stewart Petrie, Campbell made the move from playing staff to management and flourished in the role during a season run in that took the Club to their first promotion play offs in 9 years.

Ross arrived at Links Park in 2015 from East Fife and made 21 appearances as a player last season.

Ross said, “I really enjoyed working as a coach at Montrose in the second half of last season. Everything at the club seems to be moving in a positive direction so when I was asked to step into the Assistant Manager position, I did so without hesitation.

"At 34, I still have ambition to keep playing as long as I can however the opportunity to work closely with Stewart, Jim and Sean was too good to turn down and will be my focus over the next two years."

Stewart said, “I am delighted Ross has agreed to extend his contract. He is so professional and super organised with everything he does and is a really positive influence on the boys.

"With Sean Dillon coming in as First Team Coach to join Ross and Jim Butter, our Goalkeeping Coach, I couldn't have a better or stronger backroom team.” 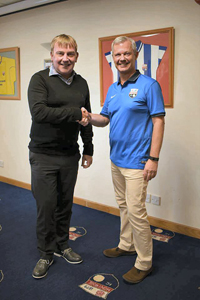 The Golf Inn have confirmed their sponsorship of the Bon Accord Lounge at Links Park for the second year running.

Kevin said "We are delighted to sponsor the Club again this season. We like to think of ourselves as a community establishment and Montrose FC is one of a number of local clubs and teams we sponsor. We would like to wish the club every success this season".

Peter added "We are delighted that The Golf Inn have continued with their sponsorship for the coming season. It is a fantastic local establishment with Kevin and Alison doing a lot for the local community. We really appreciate their support."

Pictured are Kevin Young and Peter Stuart in the Bon Accord Lounge sponsored by the Golf Inn.