Our Irn Bru Challenge Cup 1st Round tie away to Stirling Albion has been confirmed as Tuesday 15th August with a 7:45pm kick off.

Taking an elbow to the face in our Cove Rangers friendly last Friday, new signing Jamie Redman has been left with a broken jaw and will miss out on first team action for 6 weeks.

A disappointing start to his Links Park career as he will miss the whole of the BETFRED group stage, the first round of the IRN BRU Challenge Cup and at least 2 league matches.

We all wish Jamie a speedy recovery.

A few familiar faces dropped in to Links Park today for a breather and bite to eat as part of their 80's LEG-ENDS Cycle for MAGGIES Dundee.

Starting at Tannadice to Gayfield, then Links Park, Glebe Park, Station Park then returning to Tannadice, the 10 men are covering the 5 clubs and 75 miles all to raise money for the MAGGIES Centre at Ninewells Hospital.

Montrose FC have secured the services of ex-Dundee United Captain Sean Dillon on a two-year deal until the summer of 2019.

Since ending his 10 year stint with the Tangerines a month ago, a string of clubs including Peterhead, Arbroath, Forfar, Alloa and East Fife have all reportedly been chasing the 33 year old defender.

Mo Boss Stewart Petrie was obviously thrilled at landing such a marque signing for his League 2 side, “I am absolutely delighted Sean has agreed to join the Club. His reputation goes before him and as soon as I spoke with him a couple of weeks ago, I just knew he was the real deal.”

The Dublin born Irishman will not only have a playing role at Links Park, he will also become First Team Coach, joining Petrie’s backroom staff of Ross Campbell (Assistant Manager) and Jim Butter (Goalkeeping Coach).

Petrie added, “Sean will not only bring experience on the park as a player, he will also be a fabulous influence on the rest of the squad, both at training and in the dressing room. He is a great professional and his fitness levels are up there with the best.”

Before joining United, Dillon played for Irish teams Longford Town and Shelbourne in the League of Ireland and also represented the Republic of Ireland at U16, U21 and B international level.

Moving to Scotland in January 2007, Sean became Craig Levein’s first signing and went on to make 346 appearances for the club, scoring seven goals and memorably lifting the Scottish Cup in 2010 after beating Ross County 3–0.

Sean said, “I am really looking forward to this new challenge. I had such a great time at Tannadice but it was the right time for me to move on. I have been so impressed with Stewart and the setup he has here at Montrose.

“Stewart brought promotion play-off football in his first season and I know first-hand how disappointing that can be when it doesn’t go your way but I believe we have a great chance of bringing success to this Club in the near future and I will be doing everything I can to help make that happen.”

Dillon, who will feature in the Club’s first pre-season friendly tonight at Links Park against Cove Rangers (KO 7:45pm), is pictured with co-Vice Chairmen David Laing and Peter Stuart.

The Club also confirmed that recent signing Dean Brett was to leave the Club by mutual consent.

Stewart explained, “Unfortunately Dean has found the excessive travelling is having too much of an impact on his family and so reluctantly he has requested to leave the Club.

“We completely understand Dean’s position and whilst obviously disappointed in losing such a talented player, family must always come first and we wish him all the very best for the future.”

IN MEMORY OF AULD BOB

Once again we would like to pay tribute to our good friend and Club stalwart, Bob Mutch with our annual Charity 5-a-side tournament, details below... 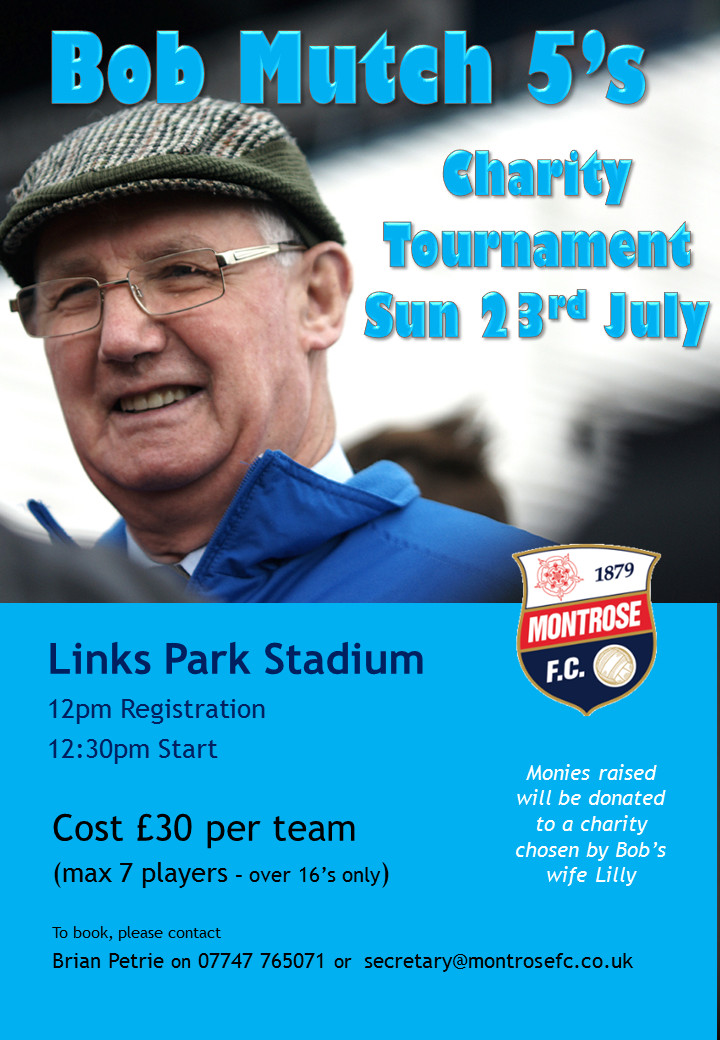 Mark Bradley of Hillside Slaters met manager Stewart Petrie earlier this week as he visited Links Park to sign up to the club's new 1879 Business Club.

Based in Montrose and covering the North East, Hillside Slaters provide roofing, plastering, stone masonry and building services, specialising in the conservation of historic buildings.

Mark said "As a lifelong supporter of Montrose FC myself, I'm delighted that Hillside Slaters are continuing to support the club and look forward to attending the events for Club 1879 members over the coming season"

For more information about the 1879 Business Club, contact Regan on 01674 673200 or This email address is being protected from spambots. You need JavaScript enabled to view it.