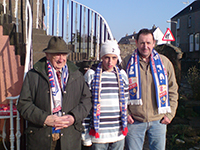 Happy 90th birthday wishes on Saturday 15 November to former Montrose FC  player and life long fan Charlie Douglas from all family in Montrose and Edinburgh.
Charlie who still stays in the town hasn’t been at Links Park as often as he would like but he is still a great source of local knowledge and that certainly came to light when Steve Doyle featured some of this tails in the Time Tunnel feature in the programme. Charlie’s son Graham and grandson Murray have both kept up the family tradition by becoming Montrose fans and both contribute each week to the match programme.
Charlie is pictured left with his son & grandson.

17’s playing “For Real”
Since Club Academy Scotland has been established, all 11-a-side games for age groups U13 to U17 has been regarded as “Development” games with no points and no League tables. Having reviewed what has been happening in other European countries the SFA have decided to introduce a competitive element at the U17 age group, so from 9th November 2014 our U17’s will now be playing for points. The current U17 squad have a combination of 15 & 16 year olds who come from various locations stretching from Banff to Dundee and also includes 4 local players from Montrose. The highlight of the season so far was a great 3-1 victory away to Inverness Caley so we look forward to a successful league campaign and hope that our boys can provide many more upsets throughout the season.

Goalkeeper Stuart McKenzie sat out Saturday’s match as he served the second of his two match suspension. Stuart was sent off for the second time this season against Queen’s Park recently.

Goalkeeper Lucas Birnstingl has returned to Canada after his red card in the derby day defeat by Arbroath. Lucas was personally very upset by his performance in the defeat which not only included his sending off late in the match but which also saw the visitors goalkeeper ex Gable Endie David Crawford score with a wind assisted goal. Lucas who has had spells with Dundee, Clyde, Queen’s Park and Airdrie United has returned home to find a new club nearer his home. All at Links Park wish him the best in the future. In total Lucas made 4 + 1 substitute appearance during his short spell at Montrose.

Montrose have signed goalkeeper Joe McGovern on loan from Dundee United until January 19.
The 20-year-old, who was previously with Enniskillen Town, is the younger brother of Hamilton Accies No 1 Michael McGovern.
He makes the move to Links Park after Lucas Birnstingl left the League 2 club to return to Canada in the wake of last week's 5-1 defeat to Arbroath.