Montrose Football Club recently appointed a new Comercial Co-ordinator Regan Tammi. Should you require to contact Regan, her contact numbers are as follows:-

Initially Regan will be based at Links Park each day however following the opening of The Home Dugout Regan will operate from the shop on a Thursday and Friday.

Get your Golden Ticket for the Petrofac Training Cup R1 Draw!

The Petrofac Training Cup round one draw takes place on Monday 29th June and for the first time supporters of all participating clubs – not least Montrose – will be right at the heart of the action!

Petrofac Training Services, proud sponsors of the Cup, is offering pairs of “golden tickets” to supporters up and down the country to be front and centre when the 32 teams enter this year’s competition.

And best of all, Petrofac will allow one lucky supporter, picked on the day, to MAKE the draw alongside a football personality and our new live draw presenter Caroline Henderson.

It really is a case of “suits at the back” as fans come first to enjoy the draw - which will also be broadcast LIVE and for free on YouTube and petrofactrainingcup.com.

Here’s the details for supporters who win a Golden Ticket:

To enter the competition Montrose supporters need to find one of our golden tweets, and submit their entry direct. Simply click to enter!

Terms and conditions apply. Up to 32 pairs of tickets available. Winners contacted by Friday 19th June. Winners will have 48 hours from receipt of email to claim their golden ticket (instructions will be provided). Valid email address used for twitter account required.

Having put pen to paper recently to continue as the management team at Montrose Football Club, Paul Hegarty and John Holt have wasted no time in beginning to rebuild a side at Links Park that they hope will see them challenge for promotion next season. Parachuted in back in February, the pair guided the Gable Endies to SPFL safety after a 3 – 2 aggregate pyramid play off victory over Highland League champions Brora Rangers.

The midfield trio of Scott Johnston, who scored in the play off final, Ross McCord and Graham Webster have all agreed terms for new contracts while the manager is looking to hear back from Paul Watson and Terry Masson who have also been offered new deals.

Forwards Ross Campbell who scored six times towards the end of the season along with youngsters Declan Milne and Kyle McLeod remain under contract.

Hegarty had hoped to keep hold of forward and play off final goal scoring hero Garry Wood but the club captain chose to move to Highland League side Formartine United. Wood will be joined at Pittmedden by central defender Jonathan Crawford who moves there after over 125 games for Montrose since his arrival from Aberdeen in 2010. Crawford ended the season with four trophies including Players Player of the Year and Directors Player of the Year.

Goalkeeper Stuart McKenzie has also chosen to move back to the Highland League and he has rejoined his former manager John Sheran at Cove Rangers after a two year spell at Links Park.

Long serving centre half Alan Campbell is also departing the club after over 180 appearances since joining in 2009 from Scone Thistle. A fans favourite Alan will be sadly missed in and around the club.

The clearout of seventeen players is a bold statement from April’s SPFL Manager of the Month and Hegarty is clearly determined to stamp his own mark on the Club.

Club Chairman Derek Sim said, “I am delighted that Paul and John have agreed to become our new management team. In their short spell last season they brought a freshness and energy to the place that ultimately secured our league status. I appreciate that fans may be concerned about the number of players departing the club, but given how disappointed we all were with last year, wholesale changes were essential. This will allow Paul and John to build their own team and I am confident we will be challenging at the right end of the league next time out.

“I would like to take this opportunity to thank Alan Campbell, Garry Wood and Jonathan Crawford for their many years service at Links Park. It is always hard to see players leave a club and I would like to wish all those departing the very best for the future. 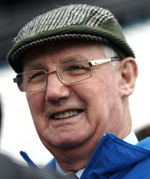 The untimely passing of Links Park stalwart Bob Mutch (pictured left) at the weekend brought closure on an extremely sad two weeks for the Links Park family. Bob was a well know face to all those who frequented Links Park and the announcement of his death came only a day after the passing of Club Photographer Tony Morrison, who had been unwell for some time. The Club were already dealing with the news of Manager Paul Hegarty’s mothers sudden death only the day after the Club secured their league status in the Pyramid Play-Off Final against Brora Rangers.

Club Chairman Derek Sim said, “These events very much put football into perspective and remind you of what is really important in life.  Our thoughts and condolences are with Paul and his family at this time.

“As for Tony and Bob, they were both well known faces around the Club and will be sorely missed.

“Tony was a larger than life character with an eye for a good shot and many of his pictures can be seen on our web site, in our programmes and even adorning the corridors and Lounges at Links Park.

“Bob has been a great servant and supporter of this Club for many, many years. Whether opening up the ground for pitch hires, chatting with players on training nights, keeping corporate hospitality guests right on match days or enjoying many of the Club’s social evenings, Bob simply loved life and loved Montrose FC.

“On behalf of all Directors, Management, players and staff, I extend our deepest sympathy to all family and friends.”

Very sad to report the very untimely death of a MFC stalwart, Bob Mutch. Bob was a great character who gave everything on behalf of the club whether opening and locking up the ground, besting with the players on Tuesday and Thursday evenings but also ensuring all hospitality guests "on behalf of the Directors can I please ask you to take your seats by 2.50". Bob, you will be sadly missed by all at MFC and on behalf of all directors, management and staff we extend our deepest sympathy to Lily, family and friends. RIP Bob.
The club have been advised Bobs funeral will take place next Monday 8th June at 2.30pm in the Old Kirk, Montrose followed by cremation at Parkgrove. A funeral tea will be held thereafter at The George Hotel, Montrose.