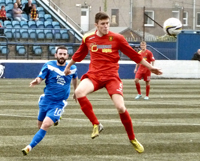 Ten man Montrose Football Club lost their first home league match of the season when they went 2 – 0 to new league leaders Albion Rovers on Saturday.
Manager George Shields side game plan went out of the window in the 4th minute after the sending off of goalkeeper Stuart McKenzie and his fellow team-mates must be praised for the amount of effort they put into the rest of the match despite the result.
Albion Rovers didn’t look that good a side and it would have certainly been interesting to see how the match would have ended up if Montrose had managed to keep eleven men on the park for only the third time this season.
Montrose must now look towards grabbing full points at their next two away fixtures at Elgin City on Saturday and Clyde the following Tuesday.
After the derby day defeat by Arbroath the Gable Endies made three changes to their line up. Out went the suspended Declan O’Kane, the holidaying Ross Graham and Stephen O’Neil. Into the side came Alan Campbell after injury, Ross McCord and Stephen Day.
Montrose lined up with McKenzie in goal with Masson and Robb in full back roles with Crawford and Campbell back to being partners in central defence. Watson and McCord were in central midfield with Day and Deasley on the flanks. Wood and Harkins were up top.
On the bench for Montrose were Webster, O’Neil, Wilson, Bell, Johnston, Cavanagh and sub goalkeeper John McCafferty.
The match got off to the worst possible start for Montrose when they were reduced to ten men for the third time in four league games this season after only four minutes.
This time it was goalkeeper Stuart McKenzie who was shown a straight red card by referee Mat Northcroft for a late tackle on Albion Rovers Ross McNeil from just beside the Montrose dugout as the attacker looked set to have a clear run through on goal. It did appear that the Rovers man was in an offside position when he started his run but no flag was raised and the Montrose number one was left with no other option.
This immediately saw manager George Shields having to sacrifice winger Stephen Day to put on back goalkeeper player/coach John McCafferty in his place for his Gable Endies debut.
McCafferty immediately faced a free kick but thankfully for Montrose Turnbull sent his effort over the crossbar.
In the tenth minute McCafferty got up comfortably to gather a cross from Turnbull.
Albion Rovers had a good chance in the 19th minute when McNeil got on the end of a McKenzie cross but the striker headed well wide.

Steven Robb then went on a great mazy run before being hacked down by Rovers Ross Dunlop who was promptly shown a yellow card. The free kick was in Paul Watson range but Parry some how kept out his effort by tipping his 35 yarder around the post when the ball appeared to be heading for the net. McCord’s corner kick was held by the Albion Rovers keeper.
In the 25th minute the visitors were claiming a corner kick when McGuigan’s shot appeared to take a deflection but referee Northcroft waved played on.
Three minutes later a great one touch passing move by Montrose saw Garry Wood brought down some 35 yards out by player/boss Darren Young. Paul Watson’s free kick took a deflection and went into the arms of goalkeeper Neil Parry.
Despite holding their own Montrose fell behind in the 29th minute when a cross from Albion Rovers full back Alan Reid was headed home at the near post by ROSS McNEIL.
John McCafferty then pulled off a great stop at the near post from McNeil’s shot after the Rovers attacker outpaced Jonathan Crawford inside the box. Thankfully for Montrose the visitors wasted the corner kick.
With 37 minutes gone McCafferty had to look sharp to block an attempt from Mark McGuigan. Kyle Turnbull took the corner kick but the unmarked Michael Dunlop headed over the cross bar from inside the six yard area.
n the stroke of half time Garry Wood was booked for a foul on Ross Dunlop.
Montrose made a second change at the start of the second half with Scott Johnston going on in place of Paul Harkins.
The early part of the second half was devoid of entertainment as Montrose looked to contain their visitors to half chances while break when they could.

The first real piece of action came in the 57th minute when winger Mark McKenzie outpaced Robb cut inside his marker but could only drive the ball straight into the arms of McCafferty.
On the hour mark played was pulled back by referee Northcroft after Montrose gained no advantage after Wood was held back by Turnbull. Watson’s free kick unfortunately went straight at Parry.
Albion Rovers then made their first change with Josh Mullen coming on for Gary Fisher.
A shot from the edge of the area by McKenzie was then deflected wide of McCafferty’s post but from the corner kick Deasley cleared.
Watson then played the ball down to the overlapping Steven Robb and his cross come shot was tipped over the bar by Neil Parry. Unfortunately Montrose could make nothing of the corner kick from Ross McCord.
In the 68th minute a volley from Gary Phillips was on target but John McCafferty made the save look comfortable above his head.
A shot from Paul Watson then won Montrose a corner kick but McCord’s kick again went into the arms of Parry. Rovers quickly broke from the corner kick and McGuigan found McNeil on the overlap but his low effort was dealt with by McCafferty.
With twenty minutes remaining Albion Rovers made a second switch with Liam Cusack replacing McNeil.
In the 75th minute Montrose made one final change with Danny Cavanagh coming on to replace Steven Robb with the Gable Endies going three at the back in an effort to get back into the match.
Paul Watson had another chance for Montrose when he collected a pass from McCord but fired over from the edge of the box.

The Gable Endies continued to press for an equaliser and were having a good spell of possession and won another free kick in a dangerous position in the 78th minute but again Neil Parry got the better of Paul Watson from 25 yards out.
Albion Rovers killed the match off in the 80th minute with a second goal on the break the ball found its way through to MARK McGUIGAN and he outpaced the Montrose back three and slipped the ball past John McCafferty.
Three minutes later McCafferty stopped Albion Rovers from scoring a third goal when he blocked a close range effort from McGuigan after the big striker had latched onto a cross from substitute Mullen.
In the final minute of the match Johnston and McCord played a neat one-two only for the midfielder’s effort to sail inches past the far post to deny Montrose a consolation strike from a difficult afternoon in which they worked their socks off with only ten men for almost the entire game.