Montrose Football Club moved up to third in the League Two table with a hard fought one goal victory over Elgin City at Borough Briggs on Saturday.

The all important encounter in a match that could have gone either way came in the 71st minute when midfielders Paul Watson’s shot took a wicked deflection to find its way into the net and give Montrose all three points.

It was hard battle with both sides creating good chances without taking them in the Elgin sunshine but in the end it was George Shields side who took the all important three points and get back to wining ways after two defeats to Arbroath and Albion Rovers.

After the defeat to Albion Rovers the previous week Montrose made one change to their line up with trialist goalkeeper Lucas Birnstingl taking the place of the suspended Stuart McKenzie who was missing his first match since signing for the club. Birnstingl had previously been with Airdrieonians at the start of the season and had spent last season with Queen’s Park.

Montrose lined up with Birnstingl in goal with Masson and Robb the fullbacks. Crawford and Campbell were in central defence with Watson and McCord in the middle of the park. Deasley and Day were on the flanks. Wood and Harkins were in attack.

On the substitutes bench for Montrose were new signing forward Leighton McIntosh who had rejoined the club from Dundee on Thursday. He was joined on the bench by Webster, O’Neil, Cavanagh, Bell, Johnston and goalkeeper John McCafferty.

Montrose were straight into the attack and created a chance inside the first minute. Steven Robb burst through a couple of challenges and slipped a pass through to Garry Wood who burst into the box before dragging his shot wide of the far post.

Wood then won a free kick after gathering a Harkins pass but Watson’s free kick was cleared by the home defence.

In the third minute Paul Watson fouled Daniel Moore but the winger’s free kick was missed by everyone and went out for a bye kick.

Elgin City went close in the fifth minute when a cross from Moore was gathered by Brian Cameron inside the box but he could only drag his shot wide of the far post with Birnstingl beaten.

It was end to end action at Borough Briggs and next to have a go was Steven Robb who played a one two with Wood before volleying the ball straight into the arms of Fraser from twenty yards out.

With 12 minutes gone Montrose created a good opportunity Jonathan Crawford chipped the ball over the head of Cooper and Masson raced into the box looked up and could only pick out a home defender who cleared the opportunity from the six yard box.

A great pass from Masson then sent Day on his way down the left wing but he was brought down by Finlayson on the edge of the area. McCord whipped the free kick into the box but goalkeeper Fraser punched clear.

In the 18th minute Stephen Day won the ball but his twenty yard effort just flew past the far post with Fraser in the Elgin City goal beaten.

Paul Harkins became the first booking of the afternoon against his former club for a tackle on Mark Nicholson. Moore took the free kick but Marvin Andrews found himself in an offside position.

A slack kick out from Birnstingl put his team-mates in trouble and presented Sutherland with a shooting opportunity but he fired well wide of goal.

Steven Robb became the second Montrose player to be booked in the 28th minute for another late challenge this time on Matthew Cooper.

Elgin City dangerman Craig Gunn then ran along the face of the Montrose box before his shot was saved by Birnstingl.

In the 35th minute Elgin City had a good opportunity when Montrose couldn’t deal with a corner kick from Moore and when the ball landed at the feet of Cooper he blasted well over the crossbar.

Three minutes later Paul Harkins won the ball on the far side of the park and fired the ball low across the goalmouth the ball arrived at the feet of Deasley but it was on his right foot and he blasted the ball wide.

On the stroke of half time Montrose won a corner kick through Day but McCord’s kick was punched clear by Michael Andrews in the home goal.

Montrose had a good chance to open the scoring two minutes into the second half Ross McCord got the break of the ball at the edge of the area and was able to slip the ball wide to the unmarked Stephen Day who snatched at the ball and fired well wide.

In the 49th minute Montrose wasted a free kick and this allowed the home side to break up the park at speed. Sutherland squared the ball to the normally deadly Craig Gunn but he could only shot wide of Birnstingl far post.

Two minutes later it was the Gable Endies turn to have a go at goal. Deasley fired over a low cross to Wood his shot was beaten away only as far as the unmarked Paul Harkins who hooked an acrobatic effort over the crossbar from ten yards out.

With 52 minutes gone Archie McPhee of Elgin City was booked for a late tackle on Ross McCord.

The home side won a corner kick but when Moore’s free kick landed at the feet of McPhee he shot into the arms of Birnstingl.
McPhee then fouled McCord again but referee Euan Anderson this time decided to take no action and the Elgin City player remained on the park.

Just close to the hour mark Elgin City carved out another opportunity when Gunn got free down the left but this time it was Shane Sutherland who slid in to knock the ball past the post.

The yellow cards were starting to mount up and in the 61st minute Elgin City captain Mark Nicolson was booked for dissent in the middle of the park.

Three minutes later Elgin City full back Gordon Finlayson was booked for another foul on Stephen Day this time at the corner flag.

Montrose were starting to step up their pressure and in the 69th minute a flick from Wood saw him put Watson away inside the box but his low cut back was grabbed by Elgin City keeper Michael Fraser.

It was Montrose who finally broke the deadlock in the 71st minute with a goal that had a large slice of luck about it. PAUL WATSON picked up the ball some twenty five yards from goal his strike appeared to being going past but it hit off Elgin City defender Matthew Cooper and spun the other way past the scrambling keeper Michael Fraser and into the net for the midfielder’s second goal of the season.

Seconds later Montrose should have made it two Wood knocked the ball through to Leighton McIntosh who outpaced Marvin Andrews and shot inches wide of the post.

George Shields them through on a second substitute with Scott Johnston replacing Stephen Day. 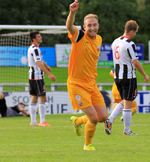 Four minutes later and the substitutions for the afternoon were complete with Elgin City making a double switch with Beveridge and Wyness coming on for full backs Finlayson and McHardy as they pushed for an equaliser. Montrose brought on Stephen O’Neil for Ross McCord.

In the 80th minute trialist goalkeeper Lucas Birnstingl pulled off a tremendous stop to keep Montrose in the match after Shane Sutherland latched onto a pass with only the keeper to beat but somehow the keeper blocked his shot at the expense of a corner kick.

In the 83rd minute Scott Johnston slipped a pass through to McIntosh but this time his low shot went wide of the far post with Fraser beaten.

Bryan Deasley became the third Montrose player to be yellow carded for a trip on Cameron with five minutes left.

On the stroke of full time Elgin City assistant boss Graham Bayne was booked by the referee for dissent.

Montrose thought they had finally put the match to bed in stoppage time. McIntosh’s shot was brilliantly saved by Fraser. The ball fell to Wood whose effort was also blocked but found Deasley at the back post who netted only for the flag to be up for offside.