Montrose Football Club crashed to their heaviest defeat of the season at the hands of East Fife at Links Park on Saturday but remained in third spot in the table some six points behind derby rivals Arbroath.
The defeat came after the Gable Endies had picked up six points on the road in the previous seven days and had looked to keep in the run going in this home fixture.
In the end Montrose gave away two avoidable goals in the space of four first half minutes and never recovered and in the end East Fife, visiting Links Park for the first time since 2008 ran out comfortable winners in a match they didn’t do very much in but didn’t really have to. Four clear cut chances and four goals for the mean from Methil.
Montrose must now look to regain their winning form this coming weekend when they play Arbroath in the second round of the William Hill Scottish Cup.
After the victory over Clyde Montrose made three changes to their line up. Out of the side went Steven Robb, Paul Harkins and Craig Bell and into the Montrose line up came Ross Graham, Leighton McIntosh and Stephen O’Neil. McIntosh making his first start of his second spell with the club.
This involved a change to formation as Montrose lined up 4 – 3 – 3. Birnstingl was in goal with Masson and Graham in full back positions. Crawford and Campbell where in the middle. O’Neil was in the centre of the midfield with McCord and Watson on either side. Wood was through the middle supported by McIntosh and Deasley.
On the bench for Montrose were Johnston, Day, Bell, Webster, O’Kane and goalkeeper McKenzie.
Montrose started the match on a glorious autumn afternoon for football and created the first real chance in the fifth minute when Alan Campbell got on the end of a corner kick from O’Neil to head inches past the near post.
In the 11th minute Leighton McIntosh was pushed on the edge of the penalty area and Watson’s free kick was just inches away from finding the top corner without anyone getting a touch.
Four minutes later as Montrose kept up the pressure they carved out another opportunity. This time McCord was tripped by Smith winning the Gable Endies a free kick. Crawford played the kick wide to Masson and his cross was blasted across goal by Wood without any Montrose player managing to get a touch. 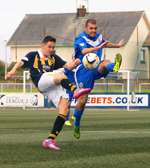 East Fife had their first real chance of the match in the 19th minute when Crawford fouled McShane. Smith played the ball wide to Liam Smith but his cross to the far post went straight out of play.
Montrose went close again to scoring in the 21st minute when Deasley found McCord but his cross was again headed wide by captain Wood.
Despite all the pressure it was the visitors who opened the scoring in the 24th minute Kevin Smith got his head on the end of a cross from his namesake Liam and referee Steven awarded a corner kick. Steven Smith’s corner was tipped over by Birnstingl and from the second corner Montrose didn’t clear their lines with McIntosh playing the ball into the path of full back FRASER MULLEN who grabbed the opportunity and fired low into the bottom corner.
Worse was to follow for Montrose as the visitors scored a second goal three minutes later and again it was presented to them on a plate by the home defence. Campbell didn’t manage to get the ball back to Birnstingl and Liam Smith was able to cross into the box. This time it was Graham who couldn’t clear and ROSS BROWN was able to blast the ball high into the net from ten yards out.
Montrose now had it all to do to take anything from the match and two minutes later Paul Watson picked the ball up on the edge of the area and his shot just went inches past the far post with keeper Fleming beaten.
Seconds later East Fife goalscorer Brown gathered the ball on the edge of the Montrose box but he too fired wide.
New signing Lucas Birnstingl kept Montrose in the match in the 34th minute when Nathan Austin turned inside the box but the goalkeeper somehow managed to push the ball around the post at point blank range.
In the 42nd minute East Fife scored again. This time Kevin Smith was allowed to break into the box. Crawford tried to stop the cross from the striker but he found the head of JON McSHANE who managed to get ahead of his marker to head past Birnstingl inside the six yard box.
On the stroke of half time Paul Watson picked up the first yellow card of the afternoon after giving away a free kick just outside the box.
East Fife were back on the attack at the start of the second half and with 48 minutes gone a cross from Scott Smith was headed over by Nathan Austin.
Montrose had a good chance to pull a goal back in the following minute McIntosh headed the ball down to Wood and he slipped the ball to Stephen O’Neil who strode into the box only to drag his shot wide of the far post.
Referee Colin Steven then chose to book East Fife’s Jon McShane and home sides Ross Mc Cord after a flare up in the middle of the park when the Montrose man appeared to be the innocent party in it all.

Bryan Deasley then got into a shooting position on the edge of the East Fife box but he could only fire wide of goal.
In the 55th minute Stephen O’Neil went on a great run which took him clear of the East Fife defence but he chose to cut the ball back to Paul Watson but he sent his effort well wide of goal.
On the hour mark manager George Shields made his first change for Montrose bringing on Scott Johnston for captain Garry Wood.
Seconds later Birnstingl kept Montrose in the game when he reacted quickest when McShane got on the end of a Scott Smith shot to block at the feet of the East Fife striker.
Montrose continued to press forward in search of a goal and Terry Masson was next to carve out an opportunity when ne broke into the box but instead of having a crack at goal he passed to Watson but the midfielder hooked the ball over the crossbar.
In the 62nd minute Montrose made a second change bringing on Stephen Day for Ross McCord.
Three minutes Montrose had claims for a penalty kick when Leighton McIntosh appeared to be clipped on the edge of the box but referee Steven was having non of it and play continued.
Montrose then had another opportunity to get a goal back O’Neil played the ball back to Stephen Day and his cross come shot nearly drifted in at the far post with the East Fife defence able to scramble the ball clear.
Stephen Day had livened up the Montrose attack and moments later his cross was grabbed inside the box by Fleming.
With 70 minutes gone Leighton McIntosh brought the ball down and played it to Bryan Deasley but he could only volley straight into the arms of Allan Fleming.
The afternoon was ended for Montrose with fifteen minutes remaining when they were reduced to ten men for the fourth time in seven league fixtures. This time it was striker Leighton McIntosh who saw red for aiming a kick at East Fife centre half Jonathan Page after the ball had gone in frustration.
East Fife then made their first substitution of the match when ex Forfar Athletic striker Ross Campbell came on for Jon McShane.
The visitors then made a further change three minutes later when Lewis Barr came on for Allan Walker.
With ten minutes left they made their final switch when Caolan McAleer replaced Nathan Austin.
East Fife wrapped up a comprehensive win with five minutes remaining Campbell lobbed the ball up the back post and KEVIN SMITH had the easiest chance to head past Birnstingl from inside the area.